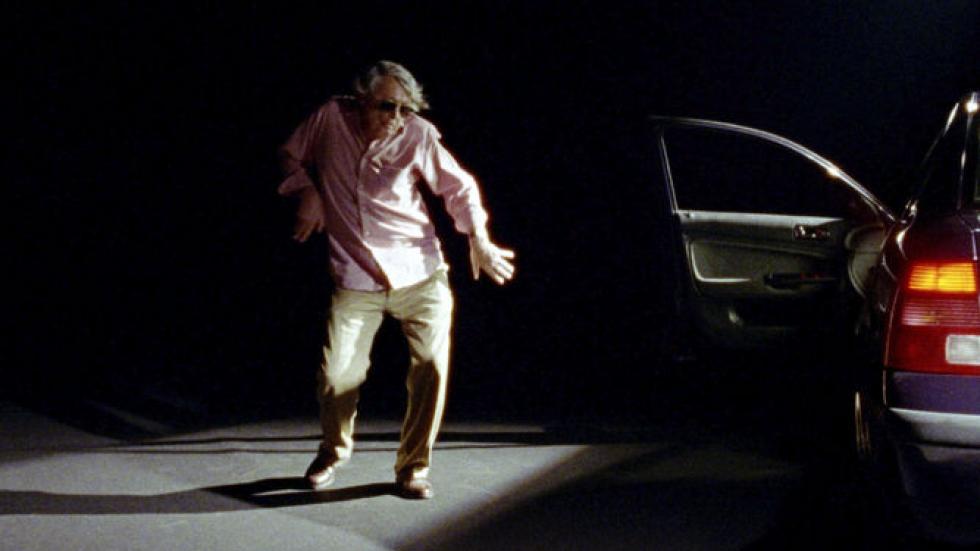 The summer has already begun after the solstice of June 20. The spirits are lightening, and in this library we are taking advantage of the impasse to freshen up with a musical review on the films of the filmmaker João Nicolau (Giraldillo de Plata winner for Technoboss). Nicolau, who is also an editor and has acted (and collaborated) in films by directors such as Miguel Gomes and Sandro Aguilar, is an amateur musician, a self-confessed admirer of Minelli's musicals and a collector of ethnographic sound recordings from around the world. He made his debut in 2006 with the short film Rapace: a self-confident young man permanently in his pyjamas, putting his brain to rest, who enjoys writing songs with a friend about his neighbourhood. Some of his trademarks, such as his deadpan face actors and his particular escapes from reality, are already present in Rapace, which reaches its climax with a collective catharsis featuring a short circuit that takes place to the rhythm of Prince Buster's song "Madness":

In 2009 Nicolau releases another short film to the world: Canção de amor e saúde, starring one of his other long-time collaborators, Portuguese musician Norberto Lobo (in records such as this one, https://www.youtube.com/watch?v=J6osOcSJ9OY, a sort of post-grunge John Fahey). In the soundtrack of this film, about a locksmith shop clerk who makes a unique key for an unexpected customer, there are real gems: from Bach to the traditional song Barbara Allen, performed by Shirley and Dolly Collins:

A espada e a rosa (2010) was his first feature film, co-written with Mariana Ricardo (from here on his co-writer in nearly all of his upcoming works), an invitation to the journey of Manuel, a man who decides to leave his life behind and embark on a pirate ship. The songs on the film's soundtrack, composed by München, were almost all performed live and recorded during the shooting. Like, for example, the song Manuel sings to the tax collector:

In Gambozinos (a coming of age story set in a summer camp released in 2013), apart from the rap that its protagonist comes up with, the spotlight is on "The Beginning", a song by the Californian band Eels, led by Mark Oliver Everett:

John From (2015) takes us to a summer in the Lisbon suburbs, where two teenagers fill the exotic halo of the South Seas with their fantasies about a mysterious neighbour. The song "Wesward Ho" transports us directly to the world of teenage girls by the hand of the mythical Moondog, the stage name of Louis Thomas Hardin, known as "the Viking of 5th Avenue" for his striking outfit and the time he spent living on the streets, an avant-garde musician who lost his sight at a very early age.

And he ends the tropical fantasy with Lambada, the song with which the Brazilian group Kaoma triumphed on the dance floors around the world in 1989:

In 2019 he returned to Seville with Technoboss. A musical starring an unusual man who works for a security company and is on the verge of retirement. The lyrics were written at the same time as the script, and the music was entrusted to Pedro da Silva Martins, Norberto Lobo and Luís José Martins. Songs like the leitmotif of the film, become true earworms:

And also contributions from the Spanish pop scene can be added to the list, like "Aserejé" by Las Ketchup (a song so omnipresent in 2002 we would have had to live in a cave not to have heard it) , for those who haven't seen it we won't reveal the moment in the film.

So let's dance with João, while looking forward to more movies and music to come.