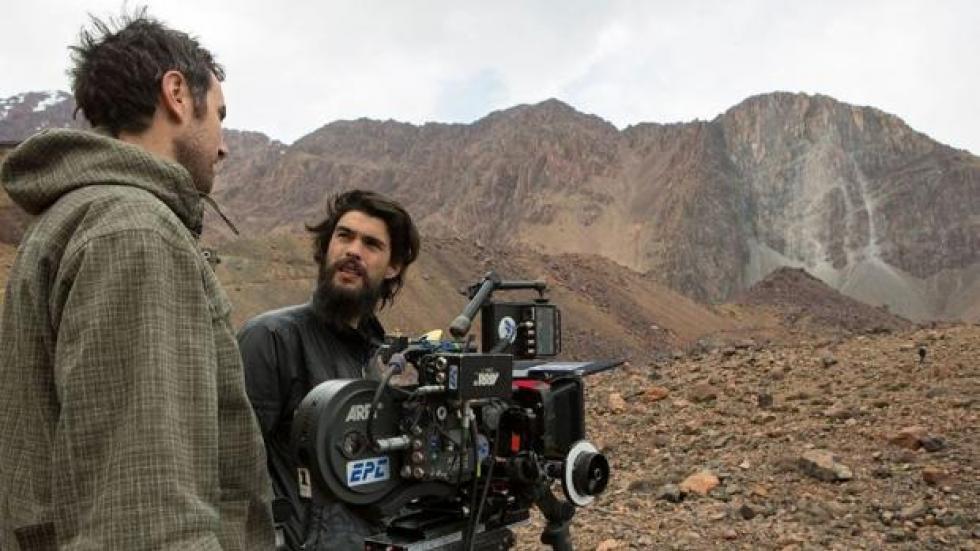 After winning the Critics' Week Grand Prix in Cannes and having premiered in several countries, Mimosas arrives at the SEFF. We spoke with its director about some of the intentions of this film that leads us into the universe of mystery and the ineffable.

JY: On several occasions you have presented Mimosas as a religious western that plays with popular references...

OL: Yes... I am referring to films such as Mad Max, Back to the Future or The Bear, which I saw as a teenager and which are still present in my life. I think that popular cinema has sometimes been able to convey quite well that duality between the epic story and the initiation story of which I am interested in. I was looking to retrieve precisely this double aspect from those films: on one hand the epic aspect, the adventure, the sensitive world, and on the other, an initiatory story with a more symbolic meaning.

JY: A duality that is expressed through the convergence of worlds that come from different times.

OL: Well..., before interpreting I would like to explain that my will as a filmmaker is quite gnostic: I want to use filmmaking as a tool to invoke something. Ultimately, I want the film to surpass me so that it ends up being something that is not me, not my intentions nor my ideas. Because I think that's where the magic of cinema lies, where it becomes a platform for relating to the ineffable. That's why there are people who understand that there are leaps in time... For me it's more like parallel worlds. This is because I've tried to strike a balance between exotericism and esotericism, between narrative literalism and mystery. To try, in short, to transcend the idea of space-time in order, from this balance, no longer to speak of the past or the future, but to relate to an idea of eternity. It is not the historical, chronological world, but the universe of the soul that has no space or time, which is eternal and immortal.

JY: In this sense, the film seems to suggest a study on faith and the lack of it.

OL: It was not my intention, but in a way it's true that, compared to Ahmed, who is the sceptical character, and the one with the disappointed heart, the figures of Shakib, Ikram and Saïd, contrast with each other, and remind him of his identity and to open his heart again. This is very simple and seems prosaic, but I think this is the answer around the idea of a film about faith. Of course, I also take advantage of Shakib's status as a mad genius to talk about a subject that could otherwise fall into the new age or empty esotericism, and that could upset cynics. Through his innocence I legitimize myself to talk about faith. But, here again, what really interested me was to capture the invisible, to propose a journey beyond the geographical.

JY: And bring the film closer to that esoteric part I was talking about?

OL: Exactly. More than merely a reflection, I'm looking for the astonishment of the official paradox. I think that today's viewer is very cartesian, looking for meaning in everything: ideology here, psychology there, history on the other hand... But, despite the actual viewer and the filmmaker, the image imposes itself and penetrates. I am referring, for example, to the taxi sequences, which are structural images that the project has had from the beginning and which are, precisely, those that invite the viewer to travel in several shots: the taxis are not zoomorphism or anthropomorphized but instead are spiritualized. They are spiritual entities. It is through them that we realize the profound power of the image. Cinema, as art, is related to the world of the shadow, of the unspoken, of mystery. I have chosen, however, to seek a balance also with the exoteric part, as in life: we must have a balance between the awareness of the spiritual forms in suspension, of the subtle world, and of what happens in the world of the sensitive forms, in the world of manifestation. In some way my personal universe is shaped by these parallel worlds.

JY: However, this entails the risk of turning the film into something abstract, cryptic...

OL: It's an unavoidable risk. Somehow I hold the spectator's hand, I go with him, but there are moments when I let him loose, I take his hand. Without paternalism. Yet obviously I'm the one who invites, the butler of the film. The viewers who are most confident in themselves and in the images, those who let themselves go, find a thread that ensures them not to lose themselves completely, not to give up. And I am not saying that there is no meaning in things, but that they should not be compared with the superficial cartesian reasoning that we have today as children of secularism modernity, rather with a more clairvoyant 'supra-reason'. Mimosas is a strange animal that is related to an idea that I like very much, which is that of 'revealing', a very cinematographic word that speaks of placing two veils, of veiling again, in other words, of placing a shadow. The mystic Ibn Arabi from Murcia, one of my greatest influences for this film, says: " The light is a veil". We live in the empire of light: only the visible exists. But in reality, too much light blinds us; when there is a lot of light, you can't see anything. To reveal, you have to put darkness. Thus I realize that, in order to be truly clear with what I want to convey, I have to become dark. To be truly responsible with the spectator I have to trust in them and in cinematic practice as a paranormal mystery.

JY:​ The film also proposes a confrontation between tradition and the contemporary on many levels. Here, Morocco plays an essential role...

OL: You say that it is a paradox and I think it's true that it's possible to capture the ineffable through it. But to get to the point, the avant-garde, throughout history, has always started precisely from tradition to make it present. I also believe that, in some way, our skepticism has reached such a point that it has destroyed its very essence and that this causes a more uncomfortable approach to tradition. I am part of this. On the other hand, with regard to my interest in Morocco, this occurs on several levels: of course I am interested in the clash between tradition and the modernity found there, but I also think that geologically it is a very mythical place. The mountains allow for an abstraction that evokes the genesis of the planet itself, our origins. One of the problems of this world we live in is that the lineage with all kinds of masters has been cut, and it seems to me that addressing them to honour them is absolutely essential. 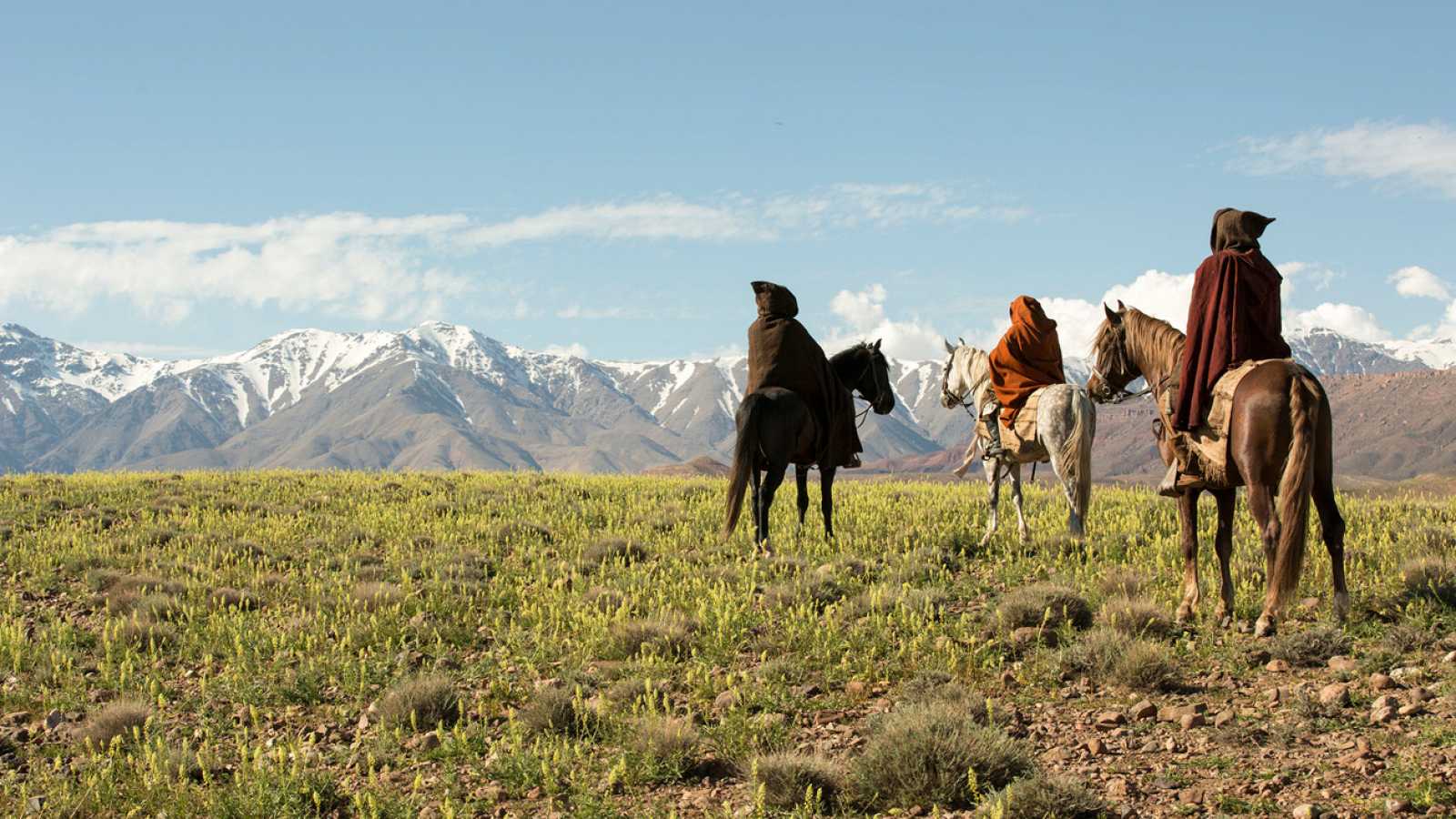 JY: Why did you decide on a structure organized into three segments, each marked by a phase of a Muslim prayer?

OL: I can explain it by speaking about several levels. Firstly because for me, as I relate art to the sacred, the whole creative process is an invocation. This film is a prayer, a celebration of the manifestation. Second, because in terms of narrative, the three stages of the prayer have a relationship with certain classical theatrical moments. Prostration, for example, is equivalent to the climax of the Greek tragedy: it is the moment when the character touches the bottom. When I speak of a religious western, I am referring to the etymology of the word religion: to rejoin, to unite. In this sense I like to think of a certain cultural promiscuity whereby the parts of the prayer are like dramatic parts.The third level is pure montage: those are placards that serve to mark ellipses, to give the sensation of the passage of time...  They were vital in this sense because we lacked footage, we shot only 60% of the script, and the panels made up for this gap.

JY: How was working on the sound and music?

OL: First I had the privilege of working with Amanda Villavieja, who is capable of putting sound to the skin along the lines of that which the Orientals say 'the soul is in the skin'. Then, with respect to the music, we opted for a theme by Om, an American post-rock band that, surprisingly, is agnostic. For me the risk here was to make, as many shady pseudo-spiritual films do, to have the drone music give transcendence to the image. To avoid this, we use music with a narrative sense: it accompanies moments in which there are revelations, epiphanies, appearances... In this way, as the film reaches transcendence through other channels, such as the image and the narration, I think that drone music is justified. At the end, a mantra is also introduced, a mantra sung by the Muslims around the Kaaba when they make the pilgrimage to the Mecca. It is a song with which the believer gives himself to God, abandons himself and disintegrates into the whole. This is what happens to the film itself, it disintegrates at that moment: we knock out reason, we abandon the narrative, the exoteric, and we enter the esoteric through that paranormal choreography of the taxis in the desert. The ending is a kind of abdication of the characters as well as a delivery of the film itself that explodes: there is a mental catharsis that provokes a physical catharsis. That's what I'm interested in doing in cinema: giving a KO to the reason to stay in the experience of the image. 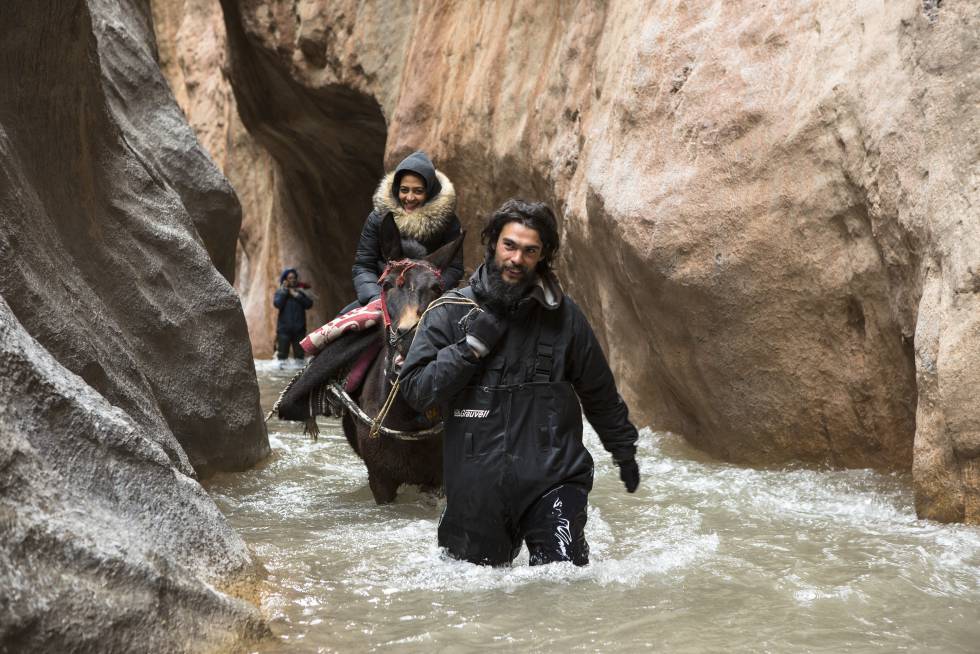