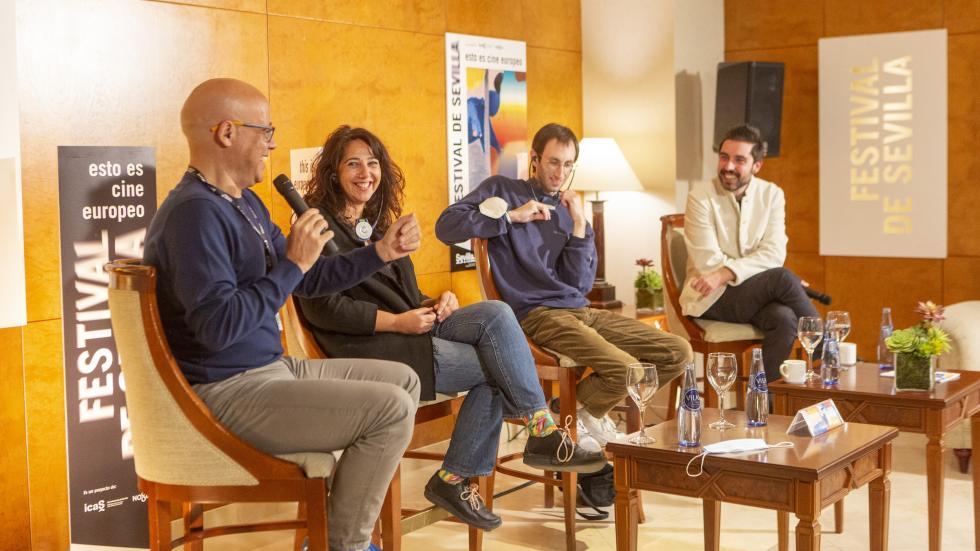 The director Ted Fendt and the documentary filmmaker Eliane Raheb bring to Seville two stories about characters with a common theme: their search for themselves.

Seville, 12 November 2021 - The last session of "Coffee with" was held this Friday as part of the activities of the Seville Festival with Ted Fendt, director of Outside Noise, and Eliane Raheb, director of Miguel's War, as the protagonists. The two feature films have been presented in the Andalusian capital backed up by previous recognition, as in other international competitions. Outside Noise, the portrait of three young people in their thirties, premiered at the Jeonju Festival as well as winning an honourable mention at the FIDMarseille, and Miguel's War, the journey of a young Lebanese homosexual in post-Franco Spain, winner of the Teddy Award at the Berlinale.

Outside Noise, programmed in the Endless Revolutions section, is a portrait of the anxiety and indolence of European youth filmed in 16 mm. The three protagonists make a series of vital decisions that at first seem trivial but, on the verge of their thirties, will condition their lives. In the Q&A, Ted Fendt explained that the actresses are also co-authors of the text. "I wrote a script that was a summary of the film. The first part of the production, in Berlin, the dialogue was being translated into German and we realised that we weren't happy, so we spent three months reconstructing the scenes. I don't know how to write in German, so they made it easier for me. They told me what could work and what couldn't work. If it hadn't, the film might have taken a different direction," the filmmaker explained.

Light has played an important role in the making of the film, as unlike his other works, this is the first time he has used artificial lighting. "I wanted to shoot in this flat (referring to the flat of the film's protagonist who lives in Berlin) because of the lighting that was there, it had some brightness superimposed on it. I love these places and how much they transmit", he said.

For its part, Miguel's War, by the Lebanese filmmaker Eliane Raheb, has premiered in the New Waves Non-Fiction section. The feature film is the result of a collaborative process between the documentary filmmaker and her protagonist, Miguel Jelelaty. "I met him by chance at a festival in Barcelona. I attended the festival with a film and Miguel was an interpreter in the Q&A after the screening. In the middle of the film he left the room and I asked him why. He told me that he had lived through the war in Lebanon and didn't feel like reliving it. When we finished, we went to a bar and for three hours he told me his story", the director recalled, describing the experience as "a magnetic moment in which you feel that someone is releasing their words and telling you something about themselves".

Jelelaty, who also participated in "Coffee with..., described the relationship between the two as "love, hate", although it is clear that the balance leans towards the former. For the filmmaker, "the protagonist's journey through post-Franco Spain is very important because it is a metaphor for how family, religion and fascism damage identity so much you end up hating yourself".