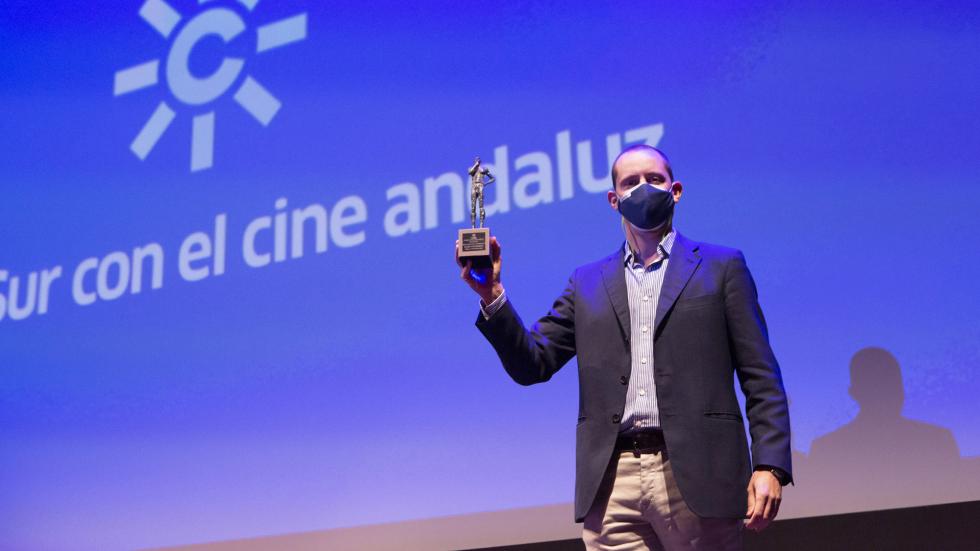 OLMO FIGUEREDO RECEIVES THE RTVA AWARD IN RECOGNITION OF HIS CAREER

The Sevillian producer, who is presenting El Inconveniente at the SEFF, received this award from Canal Sur Radio and Television during a ceremony held at the Lope de Vega Theatre

The producer Olmo Figueredo (Seville, 1980) has received the Trajectory Award granted by Canal Sur Radio and Television, within the framework of the 17th Seville European Film Festival, in an event held at the Lope de Vega Theatre. Co-founder of the production company La Claqueta and current president of Ancine (Andalusian Association of Film Producers), Figueredo has been producing film projects in all formats and genres for two decades, which have earned him numerous awards in events as important as the Goya Awards, the Feroz and the San Sebastian and Malaga festivals.

His recent achievements include the film El Inconveniente, which can be seen in this edition of the SEFF. Directed by Bernabé Rico and featuring a powerful cast headed by Juana Acosta, Kiti Mánver, Carlos Areces, José Sacristán, and Daniel Grao, it was one of the winners at the latest Malaga Festival, receiving two awards. In addition, Figueredo is also the producer of important recent titles such as La trinchera infinita - winner of two Goya Awards and candidate to represent Spain at the Oscars - and the documentary series El Estado contra Pablo Ibar, which he has directed and which, after being presented at the San Sebastian Festival, will be released on HBO.

It is worth noting that Figueredo also participates, through its production company La Claqueta, in Mamacruz, one of the three winning projects within the European Coproductions Forum, held as part of the Seville Festival's Industry Days. The project has been awarded the Arte Sonora Estudios Prize worth 5,000 euros in post-production services since, according to the jury, "it is a daring comedy that will break molds and stereotypes".

Since 2005, the year in which the Canal Sur Career Award was created, directors such as Benito Zambrano, Josefina Molina, Alberto Rodríguez, Miguel Hermoso and Martín Cuenca have been awarded; producers such as Gervasio Iglesias, and actors such as Antonio Banderas, Antonio de la Torre, Juan Diego, Ana Fernández, José Luis Gómez, Inma Cuesta, Antonio Dechent, Kiti Mánver, Paco León and Paz Vega. In addition to the presentation of this award within the framework of the Seville European Film Festival, Canal Sur Radio and Television has been collaborating in the dissemination and promotion of the event thanks to its annual partnership with the Institute of Culture and the Arts of Seville (ICAS).