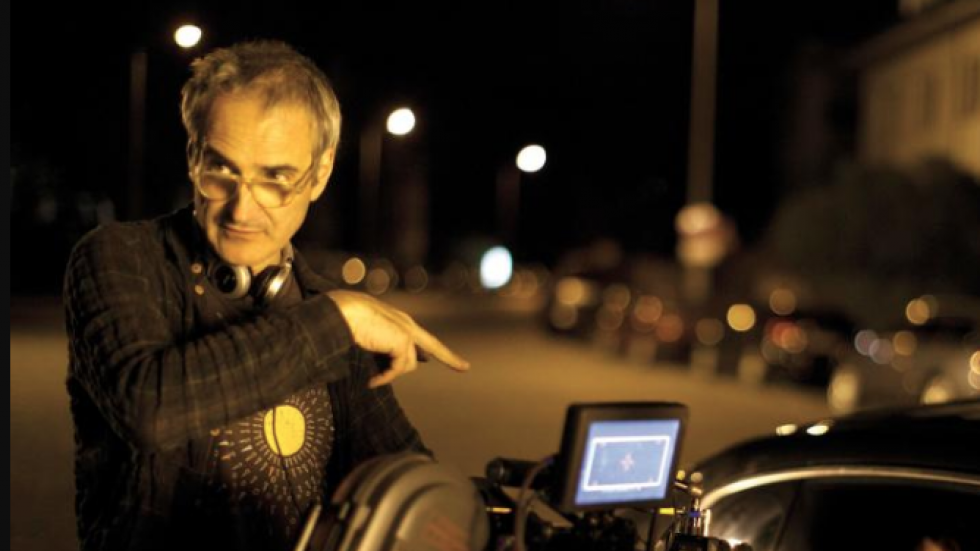 OLIVIER ASSAYAS: THE FILMMAKER WITHOUT LIMITS

Films such as 'Fin août, début septembre', 'Demonlover', 'L’heure d’été', 'Après mai', 'Clouds of Sils Maria' or 'Personal Shopper', or the series 'Carlos', have placed Olivier Assayas (Paris, 1955) at the peak of creativity in European cinema. The French director will inaugurate the #15FestivalSevilla with 'Non-Fiction', a comedy in which there is room for infidelities and the mid-life crisis, social networks and disputes between tradition and the technological revolution and its derivatives. This is Assayas’ funniest film, and we take this opportunity to rescue 15 of the filmmaker’s reflections in various published interviews to summarise his way of seeing art and cinema.

"I make films because I relate potentially with the experience of sharing. I love sitting with the audience, it’s something visceral, it can’t be compared with seeing films on television. Another of the reasons is to expand my perception of the world, and all the films I’ve made have helped me do it. There aren’t many ways of making a living that allow that. And, as the same time, thanks to my films I’ve seen my fantasies become reality. Not to mention the social service it fulfils. Cinema has that ability to do good. What’s more, it has the responsibility to do it. Films should make us think and defend the idea of freedom and independence with regard to power. Especially in the world today, they should be calls to rebellion".

"When you make a film you hope that everyone will like it. Unless you’re Lars Von Trier, your intention isn’t to provoke the audience’s rejection. I never make films to please but neither do I stop thinking about the audience. A lot of the dominant cinema scorns the spectator, it thinks the audience is made up of passive idiots. I think the opposite. That’s why I don’t like Hollywood films, because they try to keep the public passive".

Flee from what is expected

"There are those who always make the same kind of film, and many of them are great filmmakers, who maintain a constant: the same kind of characters and genres, and so they manage to represent the universal. Then there is the other kind of filmmakers, with whom I identify, who tackle the diversity and complexity of the world, and each one experiences it in his way and in a form that isn’t one-dimensional. Perhaps what gives homogeneity to my work is the freedom to see the world from different angles, even if I always see the same world. What has always interested me, and it’s something that runs through my work, is the displacement of space and time”.

"I’d have trouble adapting. The Hollywood system has a lot to do with control, and there is nothing more boring than control. Making films is fun. Even when you make a very serious or tragic film, directing is like a children’s game. And in Hollywood they’re determined to take all the fun out of it. Also, in America the directors are mere employees of the producers. And I didn’t go into films to be an employee.”

"Most of the digital revolution has already happened. The essence of the medium has changed, like the way of consuming cinema. But I’ve devoted my life to cinema because I love the big screen. I still believe that it’s magic, even when I go to a multiplex to see some stupid American blockbuster. Netflix and other similar platforms are operating in the area of ambiguity: they hire prestigious directors to use their names and show that they can provide that kind of content. I’m not interested, I still want to see the latest film by Cuarón on the big screen. We are at a time of transition, full of difficult questions, and I think that it’s still complicated to know exactly how the importance of this kind of services will develop in our art. But it’s hard to finance a film, so at times you have to take the money wherever it comes from".

"It’s a benefit and a curse at the same time. I think my films mark a rupture, and not only in style. I think that art, and cinema in particular, has that side of exploration, of search, which you must bear in mind so as to be able to invent new spaces. Also, I’ve never liked the idea of being pigeonholed in a certain kind of cinema, without reinventing myself as a creator. I grew up in the 70s, my culture is basically that anything goes. I know how to do things “well”, but I think it’s boring. Getting into these kinds of problems is part of the fun". 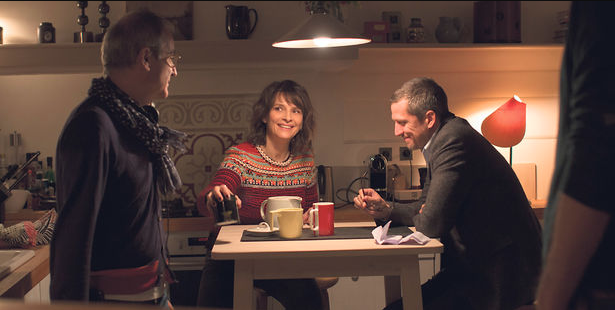 "It’s always hard for me to get financing for my films, so much so that I usually have more limited budgets than other French filmmakers of my generation. Even when I’ve shot in English, I haven’t had access to the financing system in France. I’ve always been interested in questioning the idea of cinema as a medium and the rules that exist in it. Not only cinema as an industry, but also in the area of independent cinema. That’s why at times I’m viewed with some suspicion, especially by those responsible for financing films".

"When I make films I’m very intuitive, I move by instinct. When you shoot, there’s very little time to think of abstract ideas, it’s a matter of doing things well and trying to channel energies and getting the best out of what you’ve got on the set. Once filming is finished, I try to find out exactly what I did. I think that films are expressions of our imagination, of our conscious and our subconscious. And they can be analysed just as dreams are analysed: at times I feel that the spectators or the journalists with whom I talk about the film are psychoanalysts who try to give meaning to my dreams".

The end of the process

"I think that once the film is finished, there is a mourning process you have to go through, and that implies discussing the film, dissecting it... And, at some point, you get bored with it. You know that that point will arrive at some moment, and then you know that it’s time to turn the page, carry on and recharge batteries".

"I’m very interested in filming the way in which cultures connect between themselves in this modern globalised world. It’s a subject that few directors deal with. Using foreign actors allows me to do that. If I limited myself to the French acting spectrum, to those powerful names that ensure that you’ll get financing for your film, I’d have few options for choosing my protagonists and for telling stories. For example, I wouldn’t have been able to find an actress to make 'Personal Shopper'.  Nor would I have had the privilege of working with Kristen Stewart in two films, because I think she’s a very special actress who has no limits. I’m still curious to see how far she can go". 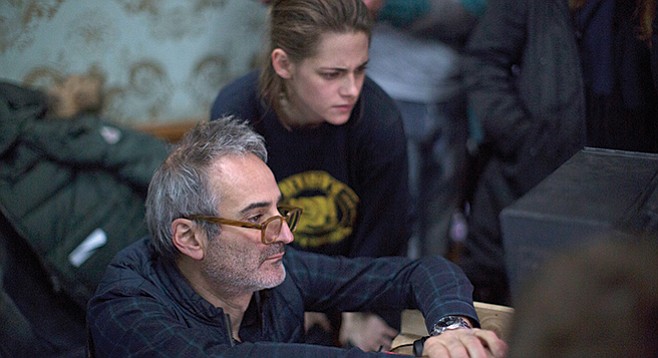 "I think that, really, I’m a feminist. Although I’ve also made stories about men, what inspires me about women is the way they’re adapting to their new position in the modern world. I think that it’s the event that defines the XX and XXI centuries. Machismo is the route that Evil finds to move in the society in which we live: it’s the justification for the violence there is in it".

Music in the cinema

"I’m not a big fan of the classic idea of film music: one of my obsessions is that things shouldn’t be perceived as purely cinematic. I believe in a spartan use of music. It should appear at the right moment, and work as an opening, elevate the film in some way, to return it to its place. At times, cinema needs that air. But music can’t be an extension of the emotions that are already on the screen. It shouldn’t be redundant, but dialectic. That’s why, when I write or film, I never think of the music that will be heard in each scene. Normally, the songs end up appearing in places that I had never considered. It’s a matter of instinct, and I think I’m fortunate to have a certain intuition in that aspect".

"For me, writing about cinema when I was young was like going to film school. My training was focused on the plastic arts and that work made my aware of aspects I hadn’t known before. I was very reluctant to appreciate everything that had to do with recordings and video; thanks to the effort I made to develop that work, I learned to appreciate cinema".

"I’ve changed, I work in a totally different way, because fortunately I’ve evolved. Also cinema technique has changed a lot. On shoots, the biggest change is that I have a little video and I can see constantly what’ s happening with the camera. I’m not sure when that happened, but it was something very important for me. Postproduction has also changed greatly. Cinema technique remained more or less the same from the start of the sound era until the mid-80s, which was when I made my first film. Since then, the changes have been very fast. It’s really interesting to see how it remained stable during most of the modern era, and we’ve moved on to something else". 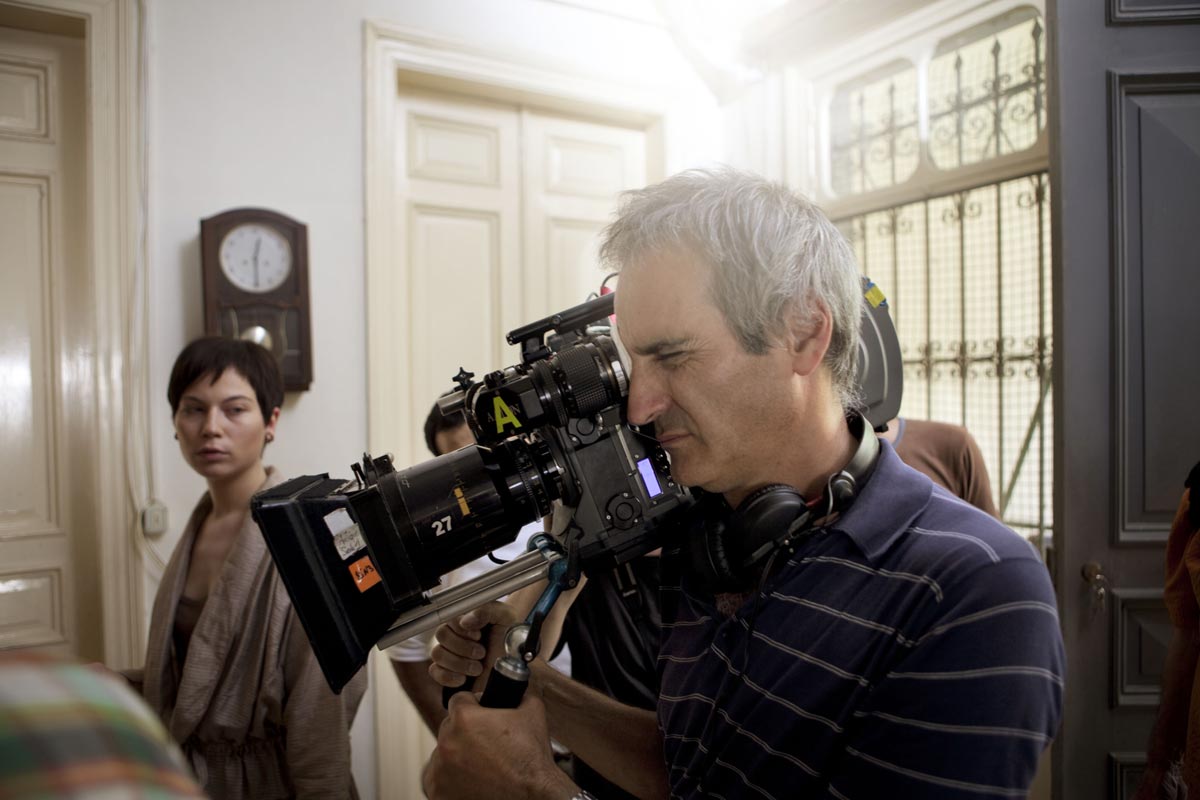