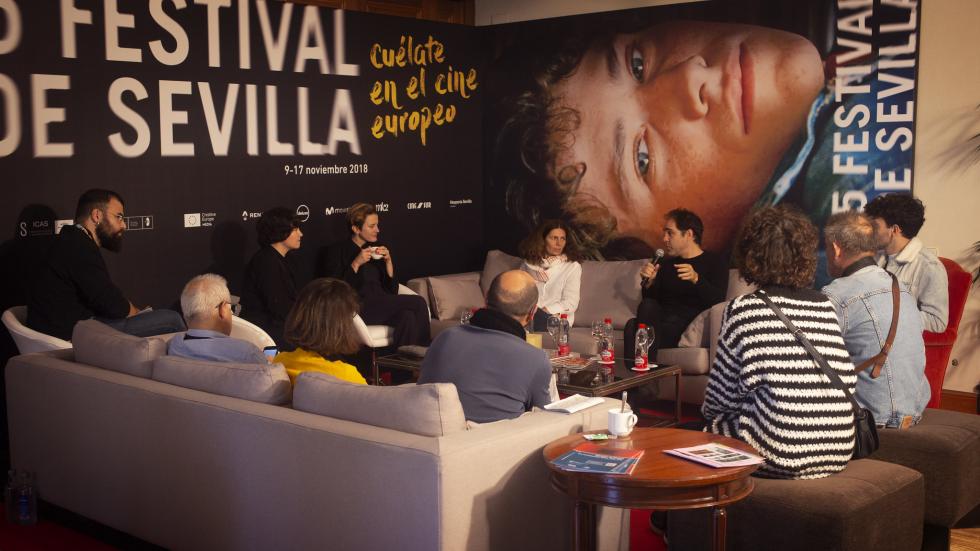 Have a coffee with the European cinema

This year, the festival opens up a close and informal area for thematic meetings for all the amateurs and curious, to talk with some of the filmmakers who will introduce their works in the show setting.

Beyond all the debates concluding a big part of the projections in the room, and which will allow the audience to interact with directors and actors, the Seville festival gives the opportunity to be close and have a talk with them in a closer atmosphere. The appointment will take place at the Hesperia Hotel terrace in Seville (Avenida Eduardo Dato, 49), and the agenda, organised in thematic meetings, will be the following:

16:30 Between what is animal and human. Non-fiction of the XXI century

The breakup of the thine line dividing fiction and reality in the documentary genre will be our protagonist in a meeting with the Austrian Elsa Kremser and the German Levin Peter (codirectors of ‘Space Dogs’), with the French Alexe Poukine (who signs  ‘That Which Does Not Kill’, the Gibraltaran Nina Danino (author of ‘Muero de tristeza llorando por ti’) and the Spanish Alexis Delgado (‘This Film is About Me’).

16:30 Social and political conflicts in the contemporary world

The fascists resurgent, the relation between maternity and Catholicism and the armed conflicts in the Mediterranean, all focus the talk that will be have presence of the Polish filmmaker Xawery Żuławski (that will introduce 'Bird Talk'), of the Italo-argentine Maura Delpero (director of 'Maternal') and of the Algerian Rabah Ameur-Zaimeche ('Terminal Sud').

There is no rule nor generic convention that is good for them, comfortable managing and playing in their films, causing a certain discontent in the audience. All of this will be discussed by the Danish Marie Grahtø (director of 'Psykosia'), the French Amin Sidi-Boumédiène ('Abou Leila') and Xavier Picard ('The Prince's Voyage'), and Jaione Camborda of San Sebastian ('Arima').

16:00 The fight for freedom in the contemporary non-fiction

16:00 The fight for freedom in the contemporary fiction

The formal or thematical freedom, the capacity to face the prejudices and to run out from the censure, applied as to the non-fiction cinema as to the fiction. There will be two fascinating round tables: on one side, Francesco Patierno (who in ‘Camorra’ offers a look and a historical review of the violent world of the Neapolitan mafia), Lech Kowalski (who in ‘Blow it to Bits’ reflects on social revolts) and the Spanish Oskar Alegría (who in ‘Zumiriki’ does an isolate exercise of reconnection with the nature).

On the other side, Klaudia Reynicke (who in ‘Love Me Tender’ offers a very particular and fascinating portrait of a woman without rules), Ala Eddine Slim (who in ‘Encantamiento’ mixes genres with inusual ability and talent), Peter Brossens (who leaps to the politic satire, with a bit of surrealism, in ‘The Barefoot Emperor’) and Jean-Charles Hue (who in ‘Tijuana Bible’ dares with a crepuscular violence story almost peckinpahiana).

16:00 Youth portraits in the current cinema

Living youngs, who look around and see a world that does not take them into account nor think too much about them, have the leading role of four films that will be projected in this Seville Festival. Their directors will talk about this looks more or less compromised with those who hope to inherit a future not at all flattering, and which, in some cases, have to make a living  outlawed, as it occurs in ‘County Lines’, by a Henry Blake who will share a talk with the Scottish Brian Welsh (director of ‘Beats’), the Bosnian Ena Sendijarević (signer of 'Take Me Somewhere Nice') and the Sevillian Alejandro Salgado ('Barzakh').

16:30 Directing and acting in the independent cinema of the current Spain

16:55 War, sex and the end of an escape. The reinvention of the European cinemas

Another double round table in the festival’s final stretch. On one side, Spanish directors and actors will reclaim another look, another way of filmmaking, more or less distant from the industry edges. There will be Miguel Rodríguez and Carmen Haro (who in 'Big Big Big' will transmute in Tom Hanks), Carlos Casas (who in 'Cemetery' bet on the sensorial in a hypnotic immersion in the jungle), Mamen Díaz and the lead of 'Violeta no coge el ascensor', Violeta Rodríguez (who will give us a fresh and rohmeriana vision) and the Burnin' Percebes and the actress Bruna Cusí (who bring to the big screen the post-humour in the Martian 'La Reina de los Lagartos').

On the other hand, the genre perspective, the patriarchy and even the post-war traumas will lead the second meeting of the day, where the Swedish Anna Odell (director of 'X&Y'), the German Henner Winckler (signer of 'A Voluntary Year') and the Ucranian Alexander Zolotuhkin ('A Russian Youth').