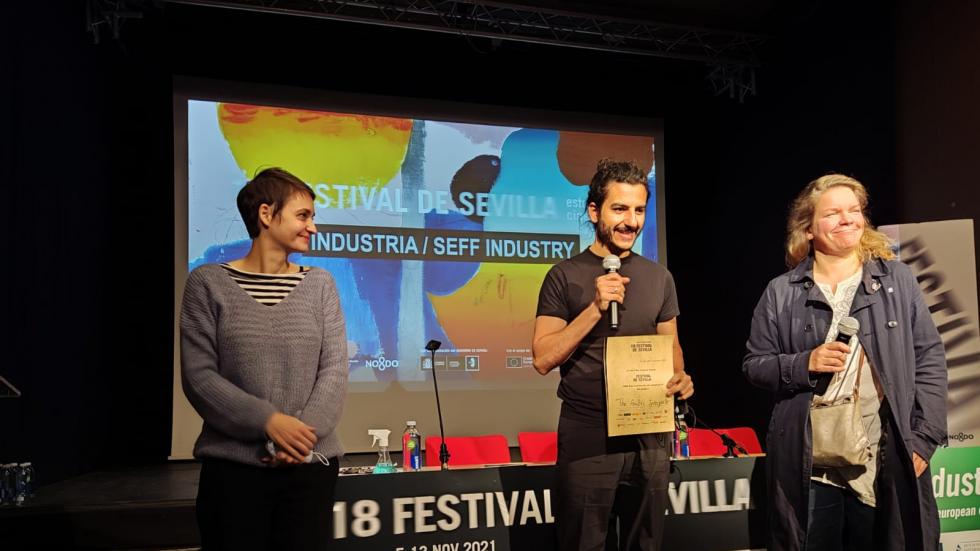 THE EUROPEAN CO-PRODUCTIONS FORUM GERMANY GRANTS AWARDS TO 'A LA CARA' AND 'THE ARABIC INTERPRETER'.

As part of the SEFF INDUSTRIA activities at the eighteenth edition of the Seville Festival, the two awards were presented at the European Co-productions forum, aimed at feature-length fiction or documentary films in the development phase, with Germany as the guest country this year.

The projects A la cara, by Javier Marco, and The Arabic Interpreter, by Ali Kareem Obaid, were selected from among the ten titles participating - five Spanish and five German - in this meeting, which was held at the CICUS on 8-10 November. The successful third edition of this forum has had an excellent harvest of projects, due to its quality and variety of themes and genres, promoting fruitful networking among the professionals involved.

The jury, made up of Olmo Figueredo, Sara Santaella and Nina Frese, recognised The Arabic Interpreter with the Seville Festival Award, worth €5,000 in development aid. The German project, which arrives in Seville after having won several grants, is carried out by the production company Achtung Panda! and directed by the Iraqi-born filmmaker Ali Kareem Obaid.

The Arte Sonora award, worth €5,000 in post-production services, went to the feature film A la cara, by the production company Pecado Films, in which Javier Marco adapts the Goya-winning short film of the same name. Marco had already participated two years ago in the first edition of European Co-productions with Josefina, which had its world premiere at the last edition of the San Sebastian Festival, in the New Directors section.