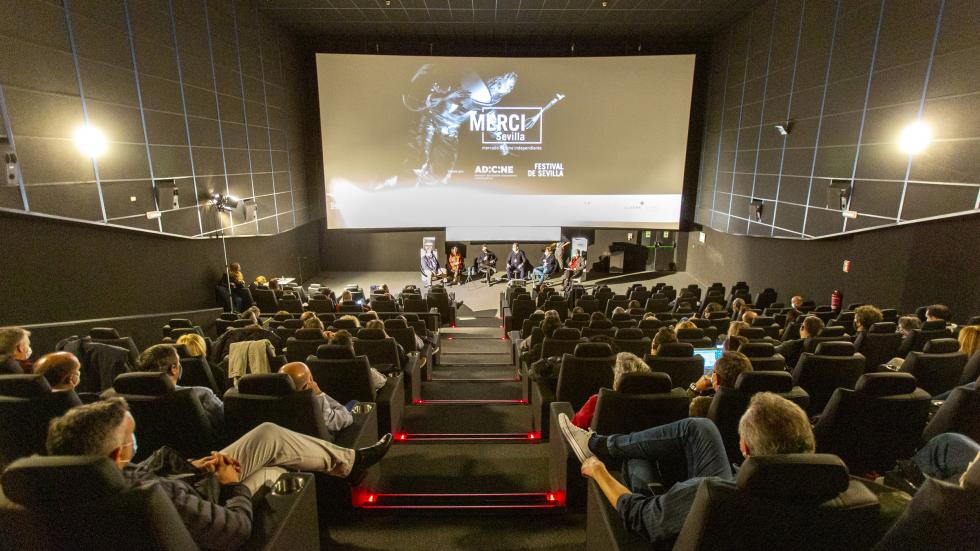 DISTRIBUTORS AND EXHIBITORS, UNITED IN THE FIRST INDEPENDENT FILM MARKET

The increase in investment, the return of audiences to cinemas and the creation of a state agency to protect independent film are among the first topics to be debated

Seville, 10 November 2021 - This Wednesday at mk2 Cinesur Nervión Plaza, the Seville Film Festival inaugurated one of the highlights of SEFF INDUSTRIA: the first edition of MERCI Seville. The project, a pioneer in Spain, is the result of collaboration with ADICINE (Association of Independent Film Distributors) and aims to boost the exhibitor-distributor relationship. From November 10th to 12th, 25 films marketed by 13 independent distributors, grouped together in ADICINE, will be screened exclusively for exhibitors and television content managers. The films are scheduled for release in Spain between December 2021 and autumn 2022.

The representatives of the Spanish exhibition and distribution federations and associations agreed that the main challenge is to bring audiences back to cinemas. "We owe it to past and future generations. It is a debt that we owe and that we have acquired," said Beatriz Navas, Director General of the ICAA.

Despite the decrease in the number of spectators at independent film screenings, Luis Gil, president of FECE, stated that his federation sees "the future with optimism and hope" and recalled that "cinema has always coexisted with new technologies but has known how to adapt". He also emphasised the health situation resulting from the pandemic, which has brought "investment in the sector to a screeching halt".

For his part, Ramiro Ledo, president of PROMIO, which yesterday held its assembly of members at the Seville Festival, called for a greater economic effort in communication and marketing of independent films, since "up until now, this has been done in a very voluntary manner". He also asked the administration for greater involvement in the exhibition: "From here, we think it is very important to do new things to offer films in the best conditions", he said.

Along the same lines, Silvia Lobo, president of Próxima, called on cinemas to place their trust in independent cinema so as not to lose audiences. One of the problems detailed by the association lies in the lack of circulation of debut films: "it is very difficult for them to have a commercial career both in the cinema and on the platforms because they have a very limited window of opportunity". Also, it has asked for greater public promotion spaces, although it has acknowledged that this is a complex request, as the powers of culture have been ceded to the Autonomous Communities. "It depends on a very large and altruistic associative force. We ask public television channels to open up new spaces so that independent audiences can become more generalised," concluded.

The president of NAECE, Juan Antonio Mayoral, called for the creation of a state agency to protect distributors, producers and exhibitors in the exceptional situation in which they find themselves. Like the other speakers, he also agreed that the lack of investment in advertising and communication in the media for films that are released means that "spectators don't know what they are going to see".

The president of ADICINE, Miguel Morales, was the last to speak at the presentation of MERCI Seville and asked those present to "work together and give independent cinema the importance and recognition it has always had". He also recalled that before the pandemic, independent cinema represented 20% of screenings, and his goal is to reach 30%.