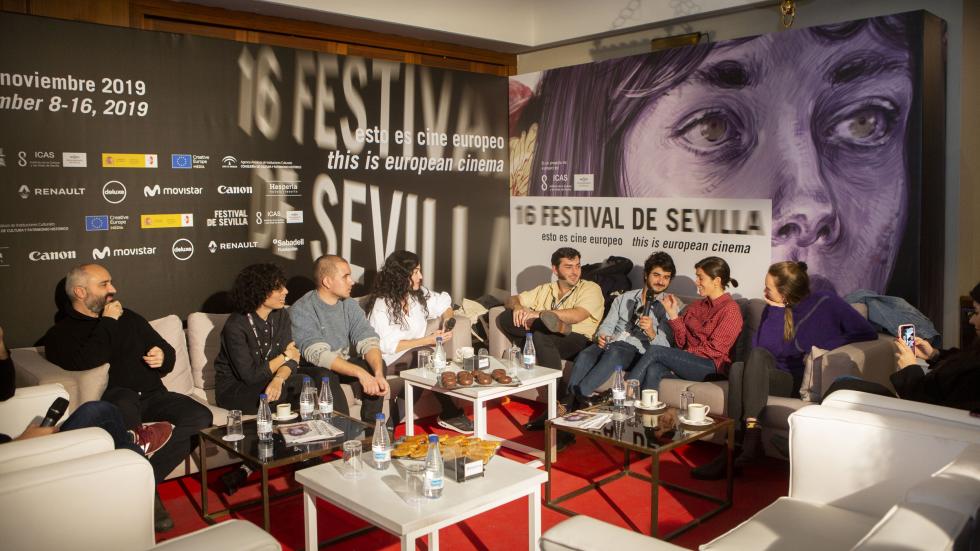 The teams of Big, Big, Big, Cemetery, Violeta No Coge el Ascensor and La Reina de los Lagartos, from the Permanent Revolutions section have participated in one of our last encounters with the audience at the 16th Seville Festival

The Seville Festival have organised an encounter with four of the Spanish films taking part in the most innovative section of the Festival, Permanent Revolutions, to reflect about new ways of film: Big, Big, Big, Cemetery, Violeta No Coge el Ascensor and La Reina de los Lagartos.

Miguel Rodríguez and Carmen Haro are the directors of Big, Big, Big, a film based on the challenge of watching the film Big, led by Tom Hanks, everyday during a month. “Our risk in this production was to watch the film Big so many times and shoot on a sofa”, has commented Miguel Rodríguez. For Carmen Haro, the risk of producing this feature film was different: “I am a university professor and researcher, and this could suppose a lost of credibility. Now, I do not think so, I do think that reinforces my speech and my image although my students are going to see me on my pyjamas”. In the future, however, she hopes to reflect the present political moment from a cinematographic point of view. “Portabella has been here these days and it has been wonderful. José Luis Cienfuegos has quoted several times Godard these days: we have to shoot politically”.

His film is part of the domestic space, in which the previous preparations were based on "organizing the people we invited to come and buy the things we were going to eat," explains Haro. These directors, who belong to different generations, intended to make a portrait of the couple in this personal environment "and show that what is personal is political", says the director. Miguel Rodríguez adds that he “is panicking” to imagine another type of production, of vertical systems and big names: “No more people are needed. We can share these production positions with each other. It is more valuable because we are aware of all parts of the process, even if it is not very ostentatious”.

The Catalan Carlos Casas has presented Cemetery, a feature film that explores the sensations of nature and immersion in the jungle. The filmmaker addresses the film process as the search for a goal: “I think that when you make a film you always pursue something. Perhaps I would choose not to make a commitment, to think about how to make that image and bring it to an end with all the consequences. In some cases, you find yourself with a certain type of cinema and nobody knows where to put you, if documentary cinema, fiction or what. For me, it is more than not making a commitment to the context, but something that comes from your own need”.

This is the first time that Casas leaves the camera and production in the hands of other people to concentrate exclusively on directing. The result is that his film covers all my influences as a spectator: “I was interested that it was a mirror, a chimera that reinvents itself as time goes by. That unites films as different as Tarzan and The Central Region”. The natural evolution of his work is for him, “to take the project to other places outside the film theatre”.

Mamen Díaz and Violeta Rodríguez have presented for the first time at the Festival their feature film Violeta No Coge el Ascensor. For the director, it has been difficult to carry out the production: “It was precarious. It was just Violeta and me. The beautiful and fun part has been organising among us, but we assumed the risk that all our friends we had involved would not feel ashamed”.

Violeta No Coge el Ascensor has been defined as a generational story, although the director and the actress have 14 years of difference. “We are from different generations. We do not have much to do, but the feeling of dissatisfaction is shared”, explains Díaz. The leading actress has also added: “we did not imagine that it was going to be a generational portrait, we only thought of talking about ourselves”.

After presenting his feature film, Mamen Díaz has even advanced his ideas for the future: “Our following projects are related to this. We wanted Violeta to be a trilogy, that three films were starring a woman even though they had nothing to do with it. The second part would be called Ultraviolet”.

Also present at the meeting were Nando Martínez and Juan González, who forms the collective Burnin’ Percebes, authors of the film La Reina de los Lagartos, accompanied by the leading actress, Bruna Cusí, winner of a Goya for Summer 1993 who has joked in the encounter about the risk of trusting her directors for this project. “Our risk was to be able to pay the rent with the money we were spending on making the film”, says Nando Martínez in response to his actress. The directors have also talked about the impossibility of becoming professional exclusively with the cinematography direction: “We want to live from the films. Now, we make a living with our shitty jobs”.

Juan González delves into the idea of ​​learning during the process: “We have learned a lot from the first films we have made. Now, we want to apply that to innovate a bit. In this case, we shot in Super 8 with cameras that broke down all the time”. His film also reflects a generational segment, although not in an intended way, since “it is about talking about yourself and that others would be represented. As you belong to a moment, this is reflected in you”, says Nando Martínez.

The European Film gets reinvented in The New Wages