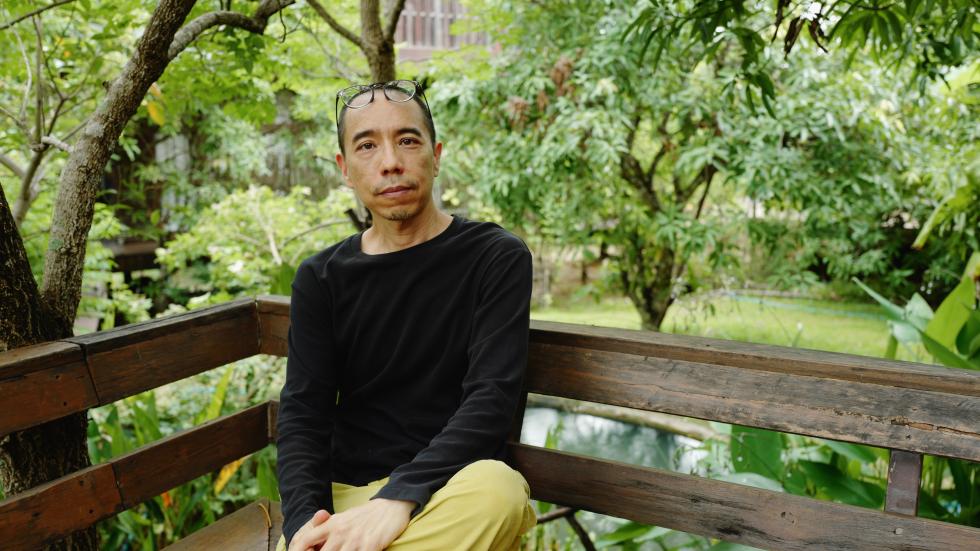 APICHATPONG WEERASETHAKUL. THE EMPIRE OF THE SENSES

"I think my films don't tend to leave anyone indifferent. Some tell me that they have made them feel a great connection, and others tell me that they haven't been able to get into them at all". Apichatpong Weerasethakul (Bangkok, 1970) is considered to be one of the most important creators on the world film scene, a celebrated filmmaker at festivals and in film circles, yet hardly, if at all, known to the general public. Contemplative, radical, always hypnotic, Weerasethakul's cinema is committed to turning each of his works into a sensorial experience, distancing himself from the rational and from more or less conventional narrative structures. Simultaneously, he has broken boundaries, and his visual content is conveyed not only through film, but also by means of galleries and museums, through installations and other artistic works.

Apichatpong Weerasethakul, collector of awards at festivals around the world, lives a seemingly perpetual love affair with the Cannes Film Festival, where he won the Palme d'Or with 'Uncle Boonmee Remembers His Past Lives' (2010). In addition, he also won the Un Certain Regard section with 'Blissfully Yours' (2002) and two Jury Prizes with 'Tropical Malady' (2004) and, just a few months ago, with 'Memoria', the film that will participate in the Official Selection of this 18th edition of the Seville European Film Festival.

Here we outline Apichatpong Weerasethakul's views on his profession, taken from the Thai filmmaker's own reflections, gathered in several interviews.

His relationship with the audience

"The way I make films depends on things that I can't put into words. I ask the audience to let themselves go, to float in the film. Discard the logic of time. And go to sleep if you feel like it, that's fine with me (...) I approach my films as something I make for myself, looking for the best way to capture on screen the ideas I have about my memories. Hopefully, the audience can use their own time and their own pace to interpret them (...) I don't have a relationship with the audience, but that doesn't mean I don't share with people, of course I do, when I go to festivals for example, I generally see myself as an audience member. Responsibility with the audience? No, my only responsibility is to my producer to finish and complete the film as promised. As an artist the best I can do is to be honest with what I do".

"I approach my films from things in my head. Memories, dreams, concepts, ideas, words, colours, places? For me, films are not great stories, that's what books are for. They are something else by themselves. Cinema is the existence of an individual experience. I feel it as if it were a living being with a soul. It can travel and at the same time make you travel. It is the tool of freedom. I even believe, innocently, that its impact can be used to improve the world, and more and more so with technological advances. I believe that even the conflict in Thailand could be solved with cinema".

"When one wakes up from a dream, something that lasts a while in the real world, in cinema it is almost instantaneous, because time is limited. Cinema messes up the processes of time. So sometimes I want to represent real time for the viewer on that and other issues. The distortion of time is cinema".

"When I'm asked about my influences, I usually cite Iranian cinema, and Tsai Ming-liang, Hou Hsiao-Hsien, Chantal Akerman... as well as Steven Spielberg, who, seen from a small Thai village, was God. Films such as Close Encounters of the Third Kind, Raiders of the Lost Ark and E.T. The Extra-Terrestrial were very important to me, they somehow pushed me to make films, even though I always saw it as something unattainable. They are all filmmakers who have inspired me to find my own light and represent it on the screen. As a kid I loved science fiction and fantasy films, especially the ones with a lot of special effects such as catastrophe films. But I've never really been a film buff, I'm mainly a follower of the kind of cinema I make, personal cinema that doesn't respond to influences. I've been increasingly looking at what I have at home, at the things that fill me and that I would miss if I lost them. My dogs, my boyfriend, my plants... They are now my greatest source of inspiration".

"I've never felt like an activist making political films. In fact, I'm not entirely sure what it means to be a political filmmaker. I don't have an agenda in my films, nor a strong desire to use my cinema to instigate change. In the same way that I don't subject my thematic and technical work to too much analysis, I'm not aware of how politics works in the foreground of my work (...) I do agree that politics are a part of my work because they belong to everyday life, like the air we breathe. So how can we not grasp politics if we try to grasp the way people live? Politics is entangled in our everyday life. We cannot escape it, even if we are very good at finding ways to distract ourselves in Southeast Asia. We can live quite comfortable lives if we want to, even without much money, but then, at a certain point, you start to see the mechanism that drives society and you realise that it's very nasty".

The Palme d'Or at Cannes

"Since I won the Palme d'Or it became more difficult to produce my films, small films, without stars. There is a climate when you are looking for financing. Now everything is demanded on a large scale. In any case, I've always thought that a film festival is a great place to meet friends and to see films. When I've been a juror at a film festival I've realised that judging a film is a superficial process, because it's really very subjective: juries are made up of just a few people. In Cannes, for example, there are films that are on the verge of winning, and if there was a little more time for the jury to discuss it, maybe the jury would change the prize list radically. So winning a Palme d'Or doesn't make a film the best. Learning that is very useful, because then you never think that you make films to win something".

"This film has been like entering new territory for me, getting out of my comfort zone. Shooting in English and Spanish, and doing it in Colombia. At the beginning of the shoot I was like a ghost drifting, absorbing movements, lights and sounds. I was aware of the political memory of the country, of course, but Memoria is not a political statement. I think it is a beautiful tribute to a territory from an outsider's perspective. I contemplated Colombia's wounds and scars a lot. But my approach was limited to observing and being aware of them. I think for local viewers, those wounds would be revealed as hidden in every shot. On the other hand, I wrote the film with Tilda Swinton in mind, knowing that she is an actress who needs no explanation. In fact, it was she who created and taught me the essence of the character. The idea of memory is embedded not only in the people, but in everything: the landscape, the sound, the water. My new film traces that through Tilda Swinton's character, how she experiences and gives herself away, and how she comes to find meaning in her own existence".