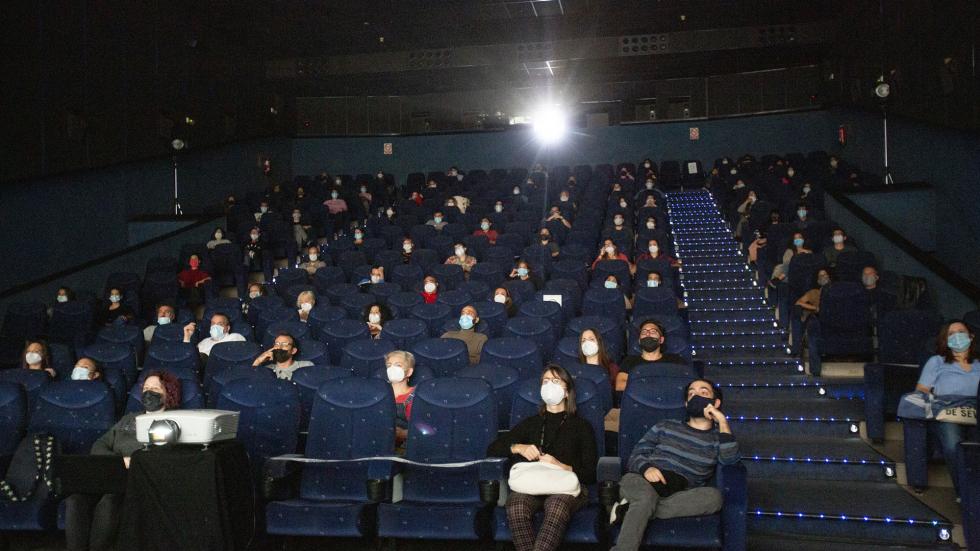 THE SEVILLE FESTIVAL RESISTS IN THEATRES

More than 1,200 professionals have followed the Industry activities, which have connected Seville with Portugal, France, Germany, Belgium and Italy

In its most complicated edition, the festival gives voice to 30 filmmakers in virtual press calls

The 17th Seville European Film Festival has been an act of cinematic resistance in theatres, and in the absence of the closing ceremony today, Saturday 14th November, there are already some activity statistics that demonstrate it. During these nine days, 147 films have been screened in cinemas, with a total of 291 programmed screenings, several of which have taken place in Madrid (thanks to the support of the Film Academy and the Golem and Embajadores cinemas). The commitment to maintain the films in theaters makes this event one of the last major film competitions in Europe in 2020.

In addition and after having passed through the theaters, 47 titles will be available for streaming on the Filmin platform, which brings the number of films programmed up to a total of 176. This novelty reinforces an edition whose greatest satisfaction has been the very fact of having been held, complying with all the necessary health prevention guarantees in the context of the pandemic. In this sense, it is worth noting that a hundred professionals have made possible the development of this event.

The SEFF Channel, a virtual window to the festival's news

The 17th SEFF has turned necessity into virtue and has inaugurated the SEFF Channel, which has broadcast 31 of its events in live streaming. In this way, more than 1,200 professionals have followed the virtual appointments of Industry, led by 160 participants, with connections from Portugal, France, Germany, Belgium and Italy. The festival has also featured European filmmakers such as Gianfranco Rosi, Christian Petzold and Ilya Khrzhanovskiy in 23 press conferences, as well as Spanish directors such as Luis López Carrasco, Margarita Ledo, Gonzalo García Pelayo and María Pérez. The communication to the media has been completed with 25 photo calls in which all the safety protocols have been respected.

Industry: a market in motion

In the 17th edition of the competition, the Industry activities have been developed as a real market in movement at a particularly sensitive time for the European sector thanks to a virtual meeting program that has allowed to continue developing the planned activities. Specifically, the European Co-Productions Forum was held, with Portugal as the guest country, and ten selected projects representing the highest level of quality, reflecting the nature of this market. In addition, the Industry program has also welcomed with great success the virtual meeting of Europa International, the European network of sales agents and distributors, with 46 members from 15 different countries, whose main objective is to improve and increase the distribution and international circulation of European films within and outside Europe.

In the same way, the Seville European Film Festival has maintained its commitment to consolidate itself as a distribution and exhibition motor for European films in Spain. In this regard, it is worth noting the presentation of PROMIO, a new network of independent cinemas that program mostly Spanish, European and under-represented countries in the annual screen quota; the Laboratory of Innovation and Audience Development for Spanish exhibitors that Europa Cinemas organizes, a network of cinemas specialized in European cinema and the presentation of European Film Factory, a platform for film education available in German, English, Spanish, French, Greek, Italian, Polish and Romanian.

In order to promote further project development, the SEFF has hosted for the sixth time the Women In Focus forum, in collaboration with the Andalusian Association of Women in Audiovisual Media (AAMMA), in addition to the activities developed in collaboration with the Andalusian Public Audiovisual Foundation, such as the XVIII Meeting of Animation and Video Games in Andalusia: A Before and After in the Production of Animation and Video Games.

The combination of formats has made possible the development of about twenty activities, eight in person and twelve online. A complete program of contents related to cinema and its ties to other creative disciplines, in which up to 33 professionals, 29 entities and 14 guests have collaborated, including directors, scriptwriters, producers, teachers and technicians from different areas of the audiovisual industry.

In a very special way, it is worth mentioning the online exhibition Cecilia Mangini. 36 Shots, the first in our country based on the photographic work of the Italian filmmaker and photographer, active today at 93 years of age. The virtual exhibition offers the viewer a glimpse into her career, a testimony to the crucial years of the 20th century in Italy: a country marked by the devastation of fascism and the Second World War, as well as by the industrial economic boom, of which Mangini shows several facets.

Also, among the activities that have been developed in its face-to-face aspect in the Espacio Santa Clara, we can remark initiatives such as Herstory, el relato de ellas, led by Carmen Tamayo, director of Mujereando. El quejío de una diosa, and Rocío Huertas, from La Alameda 2018. Basado en hechos reales, two round tables moderated by the associations TESEA (in a face-to-face format) and ACCION (through streaming) have explored the reality of the audiovisual. In the Seville Festival activities section, a micro-workshop on scriptwriting and creative writing was held by Jorge Naranjo; in addition to the presentation of the book New Andalusian Cinema, by Manuel Blanco, professor of the Faculty of Communication at the University of Seville, an event that included the participation of the actor Antonio de la Torre.

Also this 17th edition has been supported by the Instituto Cervantes through the online cycle Nuevas Cinefilias, a selection of films screened in previous years in the SEFF that could be found through the Vimeo channel of the institution.

Finally, the Center for Cultural Initiatives of the University of Seville (CICUS) has once again joined the activities of the festival, in this edition, through the seminar A blue flower among the ruins: Rewriting history on current European cinema, with the participation of Christian Petzold, Ilze Burkovska-Jacobsen, Margarita Ledo and Luis López Carrasco.

In the educational aspect of the festival, the cycle The Cinephile Window has placed eleven titles at the disposal of the educational community, as well as didactic guides associated with them, to reach its objective of bringing European cinema closer to the classroom. This program, which provides figures for optimism, has covered the entire Andalusian territory, reaching a total of 280 registered schools from 135 locations.