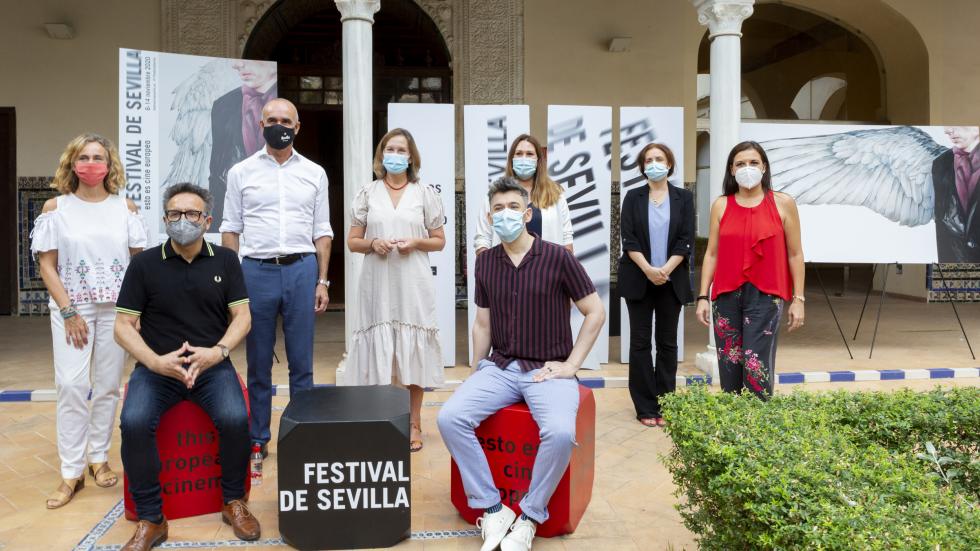 A safe and face to face edition

The festival maintains its physical nature by guaranteeing sanitary measures

Seville, September 15, 2020 - The director of the Sevilla European Film Festival, José Luis Cienfuegos, along with Antonio Muñoz, Deputy Mayor and delegate of the Urban Habitat, Culture and Tourism Department of the City of Seville, presented at a press conference in the Espacio Santa Clara of Seville the highlights of this year' s edition, as well as a first preview of its program. The event also included the participation of María del Mar Sánchez Estrella, General Secretary of Cultural Innovation and Museums of the Andalusian Ministry of Culture.

From November 6 to 14, the capital of Andalusia will become the main venue for European cinema - a meeting place for creators, the industry and the public. During one of the most difficult times for the sector, SEFF maintains its physical nature, consistent with its commitment to enjoying cinema in theaters and its service to filmmakers and audiences. This decision also allows to preserve about a hundred direct jobs and to increase the economic impact expected in one of the city's key sectors.  More than ever, we want to be of service to directors as well as to national and international distributors. Since our 2019 edition until the first day of 2020, more than 30 films that had their national or international premiere in Seville, have been shown in commercial theatres, besides participating in many other film festivals in our country, both on-site and online", explained José Luis Cienfuegos. In this regard, he stressed "the importance of our festival's prizes, such as distribution grants, which are another incentive for the circulation and visibility of European cinema".

A festival for the creators, the industry and the public

The Seville City Council, through its Institute of Culture and the Arts of Seville (ICAS), is preparing what will be the most complex of the 17 editions of the festival and will do so by emphasizing film culture, making a firm commitment to the cinemas while providing all the guarantees for health safety for spectators and guests, at a particularly difficult time for the industry. Since the beginning of the pandemic, the festival's team has been working closely with other national and international festivals to combine efforts, criteria and protocols for action. Together with the Malaga and Huelva festivals, we created the PROFESTIVALES21 committee, and with the San Sebastian and Valladolid festivals, we have maintained a permanent technical collaboration, as well as with those that make up the European MIOB network (Moving Images - Open Borders).

The festival continues to maintain the full financial endowment of 150,000 euros in prizes along with its fundamental role as a driving force behind the release and distribution of European feature films in our country. In 2020, it introduces three new categories in its list of awards, two of them aimed directly at directors and a third one dedicated to Andalusian productions, providing 5,000 Euros for each one: the awards for the Best Spanish Film Director, the Best European First or Second Feature Film Director and the Best Film in the Andalusian Panorama section (feature length).

During the presentation of the poster and the program preview of this new edition of the festival, Antonio Muñoz, Deputy Mayor and delegate of the Urban Habitat, Tourism and Cultural Area, stated as follows: "At times like these, from the Seville City Council, with the help of the ICAS and the entire team led by José Luis Cienfuegos, we were certain that Seville would be worthy of celebrating the 17th edition of the film festival in person. In this context, after the shutdown of the activity due to the confinement and in the difficult context of the Covid-19, in the City Council of Seville we believe that culture must be one of the motors of the economic reactivation, jobs that demand qualified professionals depend on it, it generates an environment of linked companies and, above all, it promotes the image of a city open to the future and to the diversity without which the society of the 21st century cannot be understood".

In this sense, Muñoz stressed that "the festival, not only will continue to be attended physically at a crucial time for the cinema and theaters in particular, but the competitions are maintained and new ones are even born, and I would especially like to emphasize that the Andalusian Panorama section will become a competition for the first time, that is to say, it has an economic prize. This shows the deep commitment of the festival and the City Council to promote and give visibility to creators and to the Andalusian film industry".

Julepe and the angel of European cinema