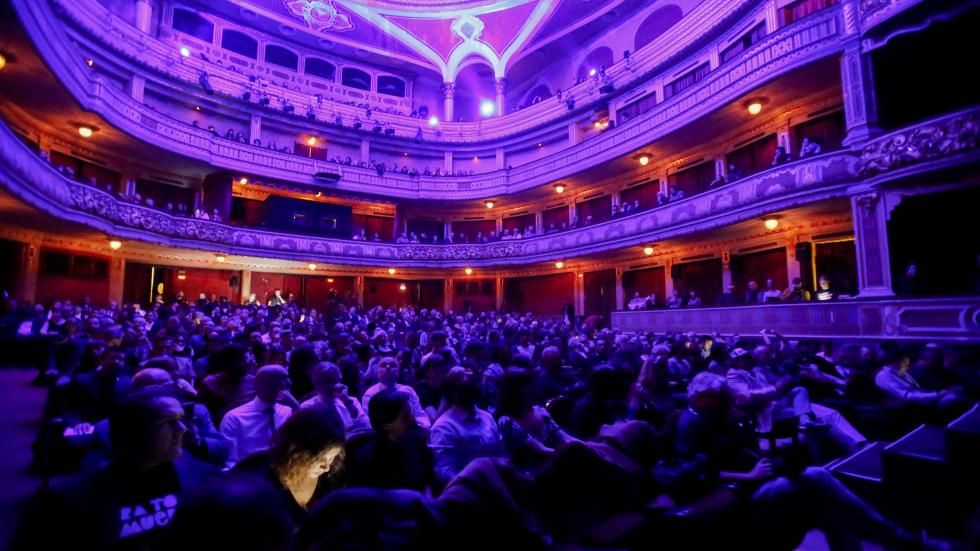 More than 100,000 people attended to all of the activities, maintaining the commitment with European cinema.

28,160 students participated in the Europa Junior and Cinephiles of the Future sections, featuring 21 educational activities.

In this edition, almost all the directors of the competitive sections were present, participating in 123 Q&A's and 167 film presentations.

The Seville European Film Festival has just closed what has been one of its best editions to date, nine days in which more than 230 films have demostrated that the city's audience lives the European film competition as a party of their own, in addition to the fact that every year more and more spectators from other locations come to Seville to enjoy the best films made on the continent. The event drew nearly 80,000 admissions, an increase of 4.21% over the 2018 box office. In total, more than 100,000 people took part in its activities.

The data for the 16th edition was made public this Thursday during a press conference in Antiquarium attended by Antonio Muñoz, delegate for Urban Habitat, Culture and Tourism of Seville City Council, and José Luis Cienfuegos, the Festival's director. This space, also part of the City Council’s ground, can be visited until December 10th, the photographic exhibition ‘The Filmmakers. Europe Portrayed', by Óscar Fernández Orengo is still on display, this action was organised in collaboration with Acción Cultural Española, and formed part of the festival's parallel activities and has already received approximately 3,000 visits.

In total, nearly 80,000 people have enjoyed the screening of the 233 films selected in the 16th edition in a total of 459 screenings. Of these, 35 have had their world premiere in Seville and 122 have been premieres in Spain. According to the director of the Festival, these figures speak of the complicity with the national and international industry, which chooses Seville as the starting point for its productions before embarking on a tour through the commercial theatres.

This year' edition was attended by the most acclaimed directors of the hour, international creators who came to Seville to premiere their latest works for the first time in Spain. Titles that reflect a European cinema that no longer knows about labels, that brings new perspectives on classic genres and that, according to the festival's results, is capable of inspiring all audiences.

Cienfuegos stressed the Festival's aim of combining a demanding and open programme with the surrounding environment without losing sight of its identity: "The Festival is committed to being complicit with the city and with cinephilia from all over Spain, through sections and cycles that attempt to represent the extent and richness of European cinema in its most stimulating aspects. A programme that also relies on bringing together audiences and guests from the industry and on a wide range of complementary, educational and professional activities. A Festival does not only act as a showcase, but also, as a cultural and social agent".

The number of directors, scriptwriters, producers, distributors, actors, programmers and journalists who attend each year shows the importance of festivals today and, on this occasion, of the Seville European Film Festival. The event was attended by more than 1,000 accredited professionals, including 46 national and international programmers and more than 285 journalists. In the case of directors, this influx has resulted in 123 Q&As and 167 screening presentations that reflect the essence of the Sevillian competition, a festival conceived not only for the exhibition of films but also as an opportunity for cinema to meet audiences.

As a result, almost all the participants in the competitive sections attended the festival (87.75%). "Every year we notice more and more the enthusiasm of the industry and creators to be present in Seville", thanked Cienfuegos before referring to the effort that the whole sector makes so that the film festivals become a meeting point for creators, industry and spectators. 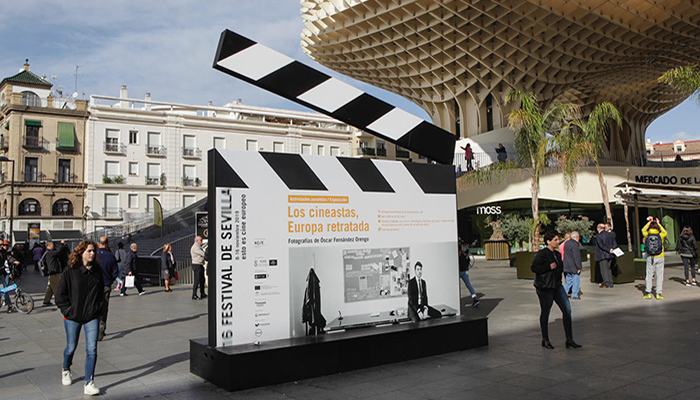 According to Antonio Muñoz, the event has also improved the box office compared to previous editions. "2018 closed with a total of 125,000 euros in revenue, this year we can speak of 130,351 euros, not to mention, the importance of this event and what it means for the  city in terms of tourism and employment. More than 150 people gets employment thanks to the festival, in addition to 250 people who gets involved as suppliers and collaborators. To these figures we must add the wealth that the event leaves in the city thanks to its value as a tourist attraction", explained the delegate.

Muñoz added that the Festival has grown in revenue by 138.19% over that of 2011, reflecting "the consolidation of the event in the city, even at national and international level, where we see an increasing interest and impact".

A Festival committed to education

The Seville European Film Festival once again highlights its commitment to education, an effort in which the Seminar 'For a cinema without limits. Images for electrical times', featured the presence and work of top-level filmmakers such as Pere Portabella, Honorary Giraldillo of the edition, José Luis Guerin, Sergio Caballero, Eloy Enciso and Albert Serra at the University of Seville's Centre for Cultural Initiatives.

A total of 21 formative activities have been held, and attended by 1,500 people, among which we can highlight contents such as that of Xavier Picard at the Seville School of Art and the meetings of Menéndez Pelayo with directors such as Lene Berg, Lech Kowalski and Lorenzo Mattotti. These initiatives reflect the SEFF's commitment to a training that must draw directly from the work of the great creators.

Other outstanding events included within the educational area were encounters with Filmmakers at the University, among others, with authors such as Alejandro Salgado at the FCOM and Lisa Carlehed at the Faculty of Psychology at the University of Seville, and the cafés and aperitifs with the directors held at the Festival's headquarters, which this year, for the first time, have been opened, in addition to the press and guests, to students from various faculties.

Both the delegate and the director have stressed the success of the sections for young people, which consolidates the festival as one of the most innovative and complete programmes for these audiences within the international panorama. "In 2012 there were 8,000 students who enjoyed the Seville program, but today we can confirm the attendance increased to 28,160 students from 200 schools in Seville, Huelva, Cordoba, Cadiz and Badajoz," said Muñoz. The 16th edition has hosted 13,952 guests who have approached the city from outside the capital of Andalusia, which places the Festival as a formative space for our young people, transcending the municipality of Seville itself, a value also achieved, thanks to collaboration with the Ministry of Education of the Junta de Andalucía," admitted Cienfuegos. 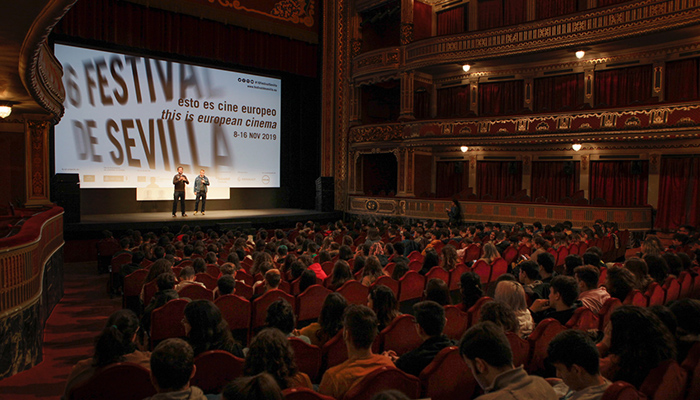 Workshops have also been held with the country's leading film schools, the ECAM and the ESCAC. To the 682 students who have gathered the Board, we must add the workshops of the Education Area of the City Council, which have had the participation of more than 3,000 students.

"These activities are in addition to those that we have traditionally carried out alongside collaborators such as the Néstor Almendros University", explained Cienfuegos before adding that, apart from these institutions, others such as the School of Dramatic Art and the School of Cinema and Performing Arts in Seville have also been introduced to the programme.

On the other hand, said the director, "we have to thank the participation of teachers in the city, nearly thirty teachers got involved in meetings and initiatives such as Plan your SEFF".

Notable among the additions of this edition of the festival is new assistance from the Regional Government of Andalusia, which through the Ministry of Culture has increased the amount contributed to the event. Another key factor has been the special collaboration with the Banco Sabadell Foundation, with which the Festival has had an agreement since this year in the Cinephiles of the Future and Europa Junior sections. These alliances join those consolidated in previous editions, such as the one with Movistar Plus as a technological partner and the Acción Cultural Española partnership, with which the Antiquarium exhibition has been created, this same organization also made possible the presence of a dozen programmers and professionals from all over Europe.

The collaboration with institutions such as Unifrance and the Institut Français, the Faculty of Fine Arts of the University of Seville and various cultural spaces in the city are also worth mentioning, which brings us to the point which allow us to mention the presence of the festival in all the areas of the creative sector in Seville. Thus, activities have been carried out in venues such as Fun Club, bookshops including La Fuga, Casa Tomada and Caótica, shops like La Carbonería and Debaga, and associations as the Casa Grande del Pumarejo.

Also noteworthy was the new collaboration with the Andalusian Journalists' Union (SPA), carrying out the screening of 'A Dark Place', which brought the event closer to the Federation of Journalists' Unions (FESP), the International Press Institute (IPI) and the OSCE Representative on Freedom of the Media.

In the parallel activities section, the 16th edition had a total of more than 30 proposals making cinema even more reachable to the public, therefore extending it into other areas of the city. Events such as 'El otro cuento' (The Other Story), which was a maxed out on its capacity, led participants to get to know La Alameda de Hércules based on a Rocío Huertas' film project, and multidisciplinary encounters, such as the one with Lorenzo Mattotti in Caótica, which linked cinema to other disciplines, in this case with drawing, the historian and Eisner prize winner got to engage with students of Illustration; while at the Casa Tomada bookshop, an also fully booked meeting with the protagonists of the film 'Violeta no coge el ascensor' took place.

Industry: Seville as a bridge for European co-productions 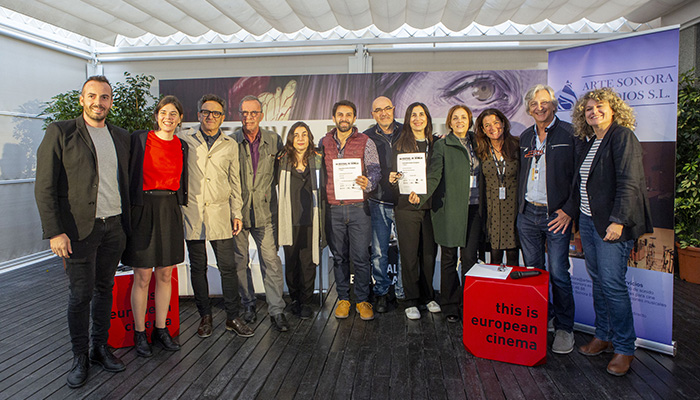 The Seville European Film Festival Industry Days continue to grow year after year. In this edition, the first European Coproduction Meeting stands out, a project that received 40 applications from Italian and Spanish film initiatives. After the great performance of this action, Seville wants to repeat it in future editions inviting new countries and thus becoming a platform to promote co-productions.

Within this section, the 16th edition also hosted the Moving Images-Open Borders meeting, which brings together different festivals in a pioneering network aimed at sharing experiences and promoting good practices.

The festival travels around the world

One of the main objectives of the Festival is to promote the circulation of programmed retrospectives. Once again, different institutions will show the cycles promoted from Seville, such as the Special Program dedicated to Norwegian director Lene Berg, part of which could be seen in the Spanish Film Library and which will later travel to CGAI (Coruña), and the retrospective 'Melodías excéntricas' (Eccentric Melodies), which in the coming months will reach IVAC, La Filmoteca (Valencia).

Likewise, the cycle 'Nosotros, Europa' (We, Europe), curated by the Seville Festival for its exhibition in different venues of the French Institute in Spain, took six films that had their national premiere in the competition to six cities (Seville, Madrid, Barcelona, Valencia, Zaragoza and Bilbao).

The commitment to Spanish and Andalusian cinema

In addition to showcasing the best European cinema, the festival has maintained its commitment to displaying the best of Spanish productions this year. Consolidated filmmakers and new talents took part in the major selection of this 16th edition of the festival. A set of films that brought together names such as Guerin and Benito Zambrano, with novel authors who are currently trying out innovative languages and creative cinema.

It should be noted that several Andalusian directors participated in competitive sections of the Festival, such as Alejandro Salgado, director of 'Barzakh', in The New Waves Non-Fiction, Miguel Rodríguez ('Big Big Big') and Mamen Díaz ('Violeta does not take the elevator) in Permanent Revolutions. Guillermo Rojas also presented the world premiere of 'Una vez más' in the Special Screenings section, which also hosted the premieres of Benito Zambrano's 'Intemperie' and Paco Cabezas's 'Adiós'.

‘THE YEAR OF DISCOVERY': NOT ALL THAT GLITTERED WAS GOLD