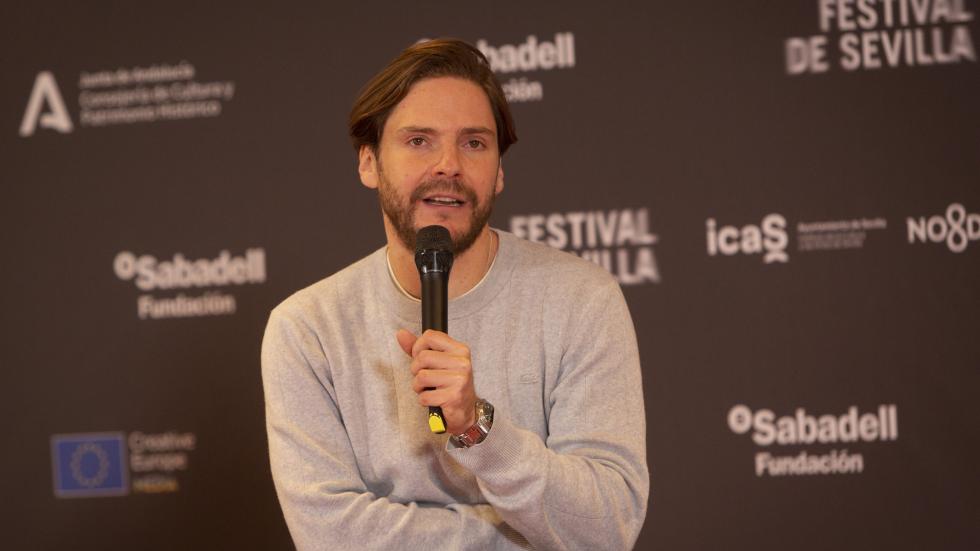 The actor made his directorial debut with Next Door and received the City of Seville Award this Friday at a ceremony held at the Lope de Vega Theatre.

Seville, 12th November 2021.- Spanish-German actor and director Daniel Brühl was the star of the eighth day of the Seville Film Festival, where he presented to the media Next Door, his debut as director, premiered in the Official Section Out of Competition. Here, he received the City of Seville Award.

The actor became famous with the film Good Bye, Lenin! and since then has had a solid career. Before receiving the award, he shared his new directing role with the Seville Festival. The filmmaker explained that before shooting the film, he contacted some of the directors he had worked with, such as Matthew Vaughn, Wolfgang Becker and Ron Howard, so that they could advise him on this new stage.

Becker, the director of Good Bye, Lenin!, told him not to shy away from the challenge of the behind-the-scenes experience. ‘He told me to enjoy it because directing also means casting your team well. You don't have to know everything, especially the first time. It was a very nice process where you have to assume that there are a lot of things you don't know. There were many technical things I didn't know, like how to handle the cameras.’

De Vauhn, with whom he worked on The King's Man, advised him to be brave and to ‘always make decisions.’ For Brühl, ‘there's nothing worse than a director who doesn't know how to make decisions. You always have to make quick decisions, you're going to be asked a hundred thousand questions, even in a film as small as the one I made. You ask yourself red or green and you say red. The next day you regret it and correct it, it was green.’

However, from Howard, who directed him in the film Rush, he learnt ‘his open way of directing and the relationship he had with the scriptwriter: an intimate relationship.’ The actor acknowledged that he had not been in contact with all the directors he has collaborated with, but he picked up his philosophy from some of them. ‘Tarantino's films have always inspired me, especially the way he executes long sequences in one place. That has inspired me a lot, the references of his films to westerns have interested me for this film.’