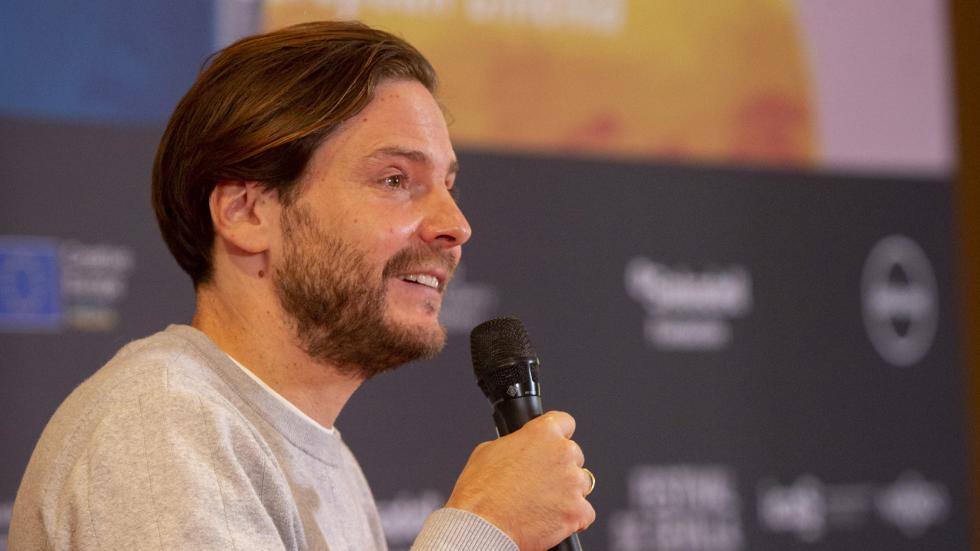 DANIEL BRÜHL: ‘I make fun of myself in Next Door’

The Spanish and German actor receives the Ciudad de Sevilla Award tonight at Lope de Vega Theatre for his career, which began with Good Bye Lenin!, the film that made him a star of European cinema and Hollywood.

The actor makes his debut as director with Next Door, a playful black comedy in which he offers the spectator a distorted version of himself.

Seville, 12th November 2020.- Daniel is an actor who lives in Berlin. He has got two children and he prepares a casting call to shoot a superhero film in Hollywood. The coincidences between Daniel, the main character of Next Door, and the director, co-writer and actor of the film Daniel (Brühl) are so obvious as they are intended. The talented Ciudad de Sevilla Award of this edition, which will be received tonight at Lope de Vega Theatre, decided to investigate the narrative possibilities of autofiction and construct a black comedy in which mockery and social criticism go hand in hand, and in which the ego of a popular actor comes face to face with a reality that the rich people are not used to looking at.

In Next Door, the fictional character of Daniel comes inside a bar close to his luxurious apartment in the Mitte neighborhood in Berlin and, without any intentions, he begins a conversation with a man of a rude aspect (Peter Kurth, magnificent in his role), who bothers Daniel with increasingly impertinent comments. Their conversation ends up taking on a dangerous and unexpected dynamic.

With this proposal, Daniel Brühl begins his path as director, being already a star of European cinema, with occasional appearances in Spanish cinema (Salvador Puig Antich, Los Pelayos) and an increasing presence in American cinema in titles such as Rush o The King’s Man, and in his debut into the Marvel Universe as Baron Zemo in Captain America: Civil War and in the Falcon and the Winter Soldier series.

In his meeting with the media, Brühl shared his deep desire to start behind the camera. ‘This idea was born more than ten years ago in Barcelona, but back then I didn't even know where to start to get the project off the ground. Among other things, because I don't know how to write.  I didn't have a structure or a production company or anything. In the last few years, I joined a production company and I was able to start the project. However, the pandemic arrived to Berlin exactly the day when we began the rehearsals. In any case, it was a story that, despite the sanitary measures, did not offer too many complications as everything takes place on the same stage with very few actors. The experience has been fantastic: the possibility to tell your own story and not be excluded from any process. From the script, because I was next to one of the best script writers in Germany, Daniel Kehlmann; to the editing, because an actor is not usually allowed to be in the editing room. I have learned a lot, it has been a brutal experience,’ remarked the new filmmaker.

Brühl has also talked about the inspiration of western films for Next Door. ‘It's like the western without weapons. There is also a duel... That was there from the beginning. I don't know if I thought of doing it like that because it made me feel more confident, being my first film. Not to lift too much weight: not to make a period film or an action film, but rather to concentrate on what I know how to do. It is an actors' film, almost a play.’

It is clear that the character of Daniel is inspired by Daniel Brühl. On this, the actor said that ‘getting into the game of talking about our own professional and personal experiences helped a lot, and we had a lot of fun. I make fun of myself a lot, because we make references to Good Bye, Lenin!, to Rush, to the series The Alienist, and also to the Marvel world,’ he laughed, referring to what happens to the character Daniel in Next Door. In this sense, Brühl has told as an anecdote, that he used the voices of his own representative and of a real Marvel executive for the calls his character receives in the film.

The actor and director also expressed his gratitude for being invited to the Seville Festival, and for the award he will receive tonight. ‘To be at such an important event like this, dedicated to European cinema, is amazing. Bringing the film was already a big deal, but to receive an award like the Ciudad de Sevilla... it's incredible. I feel very honoured and it's the best possible start I can imagine…’

On anti-EU movements, Brühl expressed his disappointment at seeing the advance of populist discourse. ‘I grew up in a time when it seemed that there was solidarity and empathy. The wall came down in my country when I was 11 years old. Borders were opened and Europe was united. It is very frustrating and disappointing to see that in times of crisis, when everyone is locked in capsules. This awakens the populists who poison society with their easy messages that help nobody. In the same line, the actor has defined himself as European above all else. ‘When I am asked, I don't say that I am German, Spanish, Catalan or French, because I have family in France. I say that I am European. I have two children and I would like Europe and the world to be a slightly different place than it is now.’

After his first experience as director, Brühl has announced that he will make new projects. ‘The process has been so nice that I'm already working with Daniel Kehlmann on another project. We understood each other so well that we are thinking about another film and a series. They are possibilities that I would like to do in Spain, and in principle, I wouldn't be in front of the camera.’ About the other facets he has explored in this film, Brühl also talked about his role as a producer, since he joined the production company Amusement Park Film, founded by Malte Grunert. ‘I really liked what I was doing, an art house cinema with an international outlook and vocation. We are working on several projects. This year, the most ambitious thing has been a new adaptation of All Quiet on the Western Front, in which I play a supporting role.’

In relation to this, Brühl reflected on the need for a return to adult audiences in cinemas. ‘We have seen in Germany that the figures are very weak for this auteur cinema, the cinema for cinephiles. There are some more commercial films that have worked well, but not as well as before the pandemic. We have to ask ourselves what are the possibilities of a film, how much audience it will reach, and it is essential to think about exporting it to other countries. That's complicated but almost an obligation. I grew up with cinema and I want to defend it. That doesn't mean that I’m going to stop participating in TV series, but it is the cinema that matters most to me. There are independent films that manage to reach a wide audience. It happened to me with Good Bye, Lenin! or with The Edukators. But this is happening less and less. I'm pretty sure that if Good Bye, Lenin! were released today, we wouldn't get a tenth of the audience in Germany.