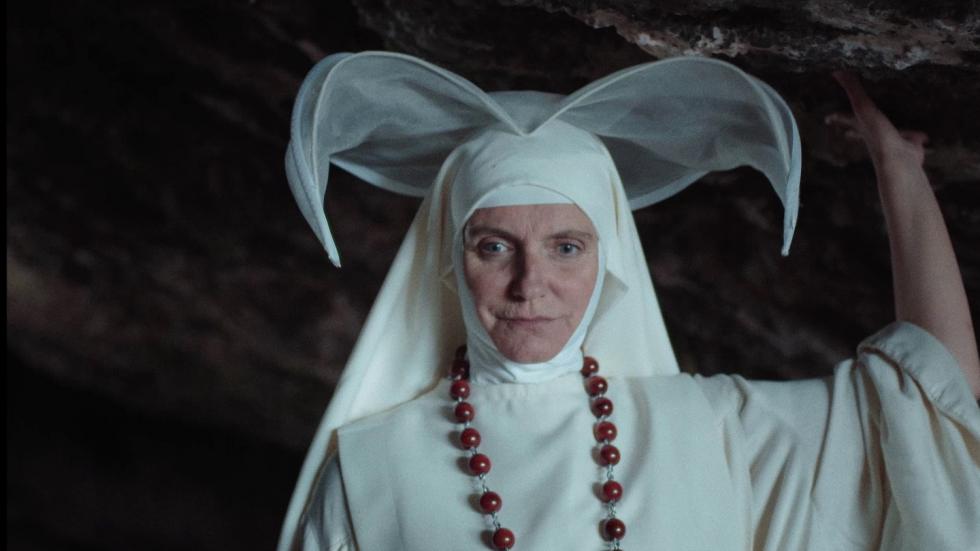 A serial killer. (A suicidal woman) who asks him for one more kiss before dying. A camera. A moment turned into a viral video.  Um Fio de Baba Escarlate’s premise ushers in a world of coloristic and imaginative sensations, an aesthetically crushing atmosphere, an unreal and stimulating world that make us immediately think of Dario Argento or Mario Brava. It also brings up that cursed genre, “giallo”. Fortunately, it was vindicated after some time.

Carlos Conceiçao’s film is one of the highlights of the section Revoluciones Permanentes. This filmmaker was born in Angola in 1979 and studied in the Lisbon Film School. Its second feature film after Serpentário (2019) is full of tributes and irreverence, while also keeping an eye on tradition. ‘I have always been drawn to the grand guignol of the post-Romanticism and the years after the Industrial Revolution,’ says the filmmaker. ‘My first field of study was the effect of the Romantic movement on the entertainment of the fin de siècle, from vaudeville to the niguelodeon and the feuilleton. Its legacy is represented by Jack the Ripper’s figure and by other fictional characters —such as Dracula, Dorian Gray, Svengali and the Phantom of the Opera. Aesthetically speaking, all of them are Frankenstein’s monsters. In a contemporary sense, serial killers are only a convention. What I am interested in is not the impulse to murder, but the fact that society turned this figure into some kind of superhero’.

Candide is the protagonist of Um Fio de Baba Escarlate. He is an unshakeable and seductive hunter, an unscrupulous murderer. This character matches perfectly with the formal transgression that Conceiçao’s film proposes. ‘I had a lot of fun writing it,’ remembers the director. ‘The lexicon chosen for this film has been set in stone in classic films for decades,’ explains the filmmaker, bringing up a great subject —inspirations. ‘Even though people always compare my work to other films as if they were a collection of quotes, I always distance myself deliberately from the films that I love. More often than not, I think about paintings or comics. Sometimes, about music. The paintings that preceded Raphael are very dear to me. Expressionist and Renaissance painters also are. However, if you ask a film student what he thinks about when planning a movie, he will most certainly be so sophisticated that he will say Caravaggio’.

Thinking about “giallo” classics —like Blood and Black Lace (1964) by Mario Bava— or Dario Argento’s films —like Deep Red (1975) or Suspiria (1977)— is almost ineluctable. Nevertheless, our protagonist’s answer about cinematographic inspirations beyond pictorial art amazed us. ‘I think filmmakers may mostly influence us subconsciously. I really like Luis Buñuel. And Fritz Lang. And Kelly Reichardt’.

We would also like to highlight Conceiçao and Vasco Viana’s collaboration. Viana is currently working as Conceiçao’s director of photography, has worked with him in some short films. They will also work together in the filmmaker’s next film, Les Fleurs Abominables. This collaboration is the key to capture the film’s visual engineering, its tones and its shades. ‘As years went by, working with Vasco was increasingly easier, since we learnt to foresee what the other would need. He knows what I want and what we Will do. I know what he can do and what he will need. This particular film was his own reference. We started planning to film it in 16 mm. Then, we were going to use an Alexa, which is the camera with which we filmed the short film Bad Bunny and which has a significant range of colors. Surely, creating the colors and textures does not depend on the camera, but on as. We ended up realising that we would only need the camera this time, in order to see through the darkness. We ended up using a simple Sony A7. In any case, it does not matter how we film, since we always spend a lot of time correcting the colors with Marco Amaral.

Um Fio de Baba Escarlate is a film with a subversive, fetishist and surrealist imaginary. It proves that Carlos Conceiçao is one of the most noteworthy and attractive voices in contemporary Portuguese films and a creator we should keep an eye on. He has declared that shock is, and always will be, a constant along his career. ‘Each film comes from its own world. For example, Serpentário came from a place that was different emotionally. It was like a fable. I hope that my next film (if it ever sees the light of day) goes in a different direction that cannot be compared to any direction my work has taken until now. The challenge is always hurtful and we always think that it will be the last, but I am too young to retire’.