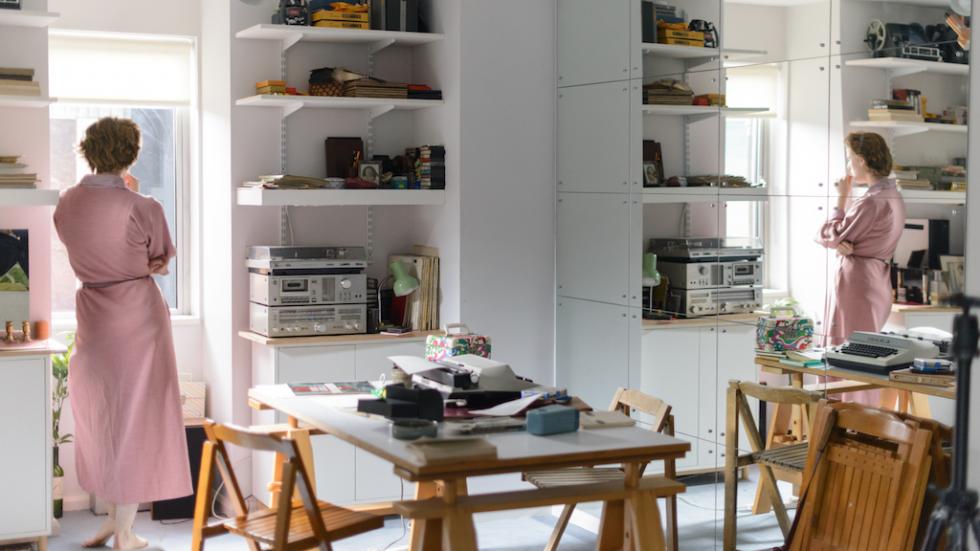 10 QUOTES TO KNOW THE FILMMAKER OF THE MOMENT

With only four feature films, Joanna Hogg (London, 1960) has become one of the most striking voices of cinema coming from Britain: as unusual as it is existential and profound, her gaze is dazzling, always after the search for the essence of the human being, of vulnerability and conflicts. With his latest work, 'The Souvenir', which has Martin Scorsese as producer, she won the Grand Jury Prize at Sundance, and her figure crossed the margins in which she moved, becoming essential in film forums from around the world.

The Seville Festival gives a retrospective to the work of the English filmmaker with the screening of 'Unrelated' (2007), 'Archipelago' (2010) and 'Exhibition' (2013), and with the premiere of 'The Souvenir' (2019), her fascinating back-sight to an episode lived in her youth (the toxic relationship she had with an older man, in her college days), with which she gives a twist to the usual cinematic autobiographies. We summarize how Joanna Hogg's cinema is understood from ten reflections in several interviews.

1) Based on real events

"I've used the word 'authenticity' to describe what I try to do in my films, but I also suspect it and its overuse. In 'The Souvenir' there is a great lack of authenticity, since any fiction is made up of inventions and lies. However, I wanted that authenticity to be questioned, because that's what I experienced: it happened to me almost exactly as it happens to the protagonist in the film, I had a relationship that I thought was authentic and true, but then I saw that feeling challenged, and that was quite devastating. I had already outlined some ideas for making a film based on this experience shortly after it was over, but I wasn't emotionally ready. When I started reviewing them, a few years ago, I was surprised at how articulate they were. Until then, when I was reflecting on my younger self, I saw a girl who didn't know what she was doing. As I reread those ideas, or my diaries of that time, I feel a slight desire to experience that again, even if I don't say I want to be 20 again. In fact, the hardest part was discovering that, fundamentally, I hadn't changed that much. I guess I'm going through a process of confronting who I was, and maybe who I am now."

"When I was living the relationship that I've made in 'The Souvenir,' I felt, in a way, like the protagonist of a movie. Instead of making them, having studied Cinema, I myself was inside one: it was a genre film, by Hitchcock, with a lot of mystery and intrigue. I did a lot of detective work, I dressed up with glamour, I went to glamorous places... Sometimes I look back and think it's a shame, I could have directed more movies, but I'm not sure I would have done what I do now, because my experiences have marked my work so much, so I'm happy."

"It is very difficult to dissect my work process, but I know that there is a delicate balance between reflection and spontaneity. I need to plan things a lot, but I also like to have the freedom to throw some of those preconceived ideas in the trash. Particularly, during filming I like to live more the moment, and I get a lot of ideas coming to mind: I change parts of the story, or the direction it leads because I see something that is being developed between the characters… It’s hard to describe, actually. I tend not to call improvisation what I do, because I think that's something that doesn't have a plan or a structure, and my work is very structured. But that structure I allow myself gives me a lot of freedom. It's also true that I work in such an intuitive way that it's hard to untangle what I've done. When I shoot a movie, I'm in a particular space. I don't disappear from myself, but I do disappear into a space, and then I'm not able to remember what I thought when I was on set."

"I think my cinema is minimalist because so is my gaze: I'm very interested in people. As a child, I was always interested in observing the behaviour of others. Somehow that's something that has recently connected with what I'm interested in exploring in my movies. In a restaurant, for example, I see three men at a table, and I'm fascinated imagining what they might be talking about, or what their lives might be like. I'm watching all the time and taking ideas of life itself."

5) Scorsese as a producer

"I think the first movie I saw of Martin Scorsese, and it's funny because I don't think it's among the most relevant, was 'New York, New York.' I can't remember what led me to her, it was probably my love of Hollywood musicals and that he was making his own version of them. I remember I had no idea that I was actually talking about the relationship between two creative people, it's very difficult to live together when you're both artists, and I think it had a profound effect on me because, somehow, I identified with that struggle. He inspired me to do 'Exhibition'. Getting to know Martin has been a gradual thing. I showed him a fragment of 'Exhibition' and he got a little involved as an advisor. When I started thinking about 'The Souvenir' I was closer to him and, as it's a film about cinema in many ways, I asked him to join as an executive producer. I confess that the proposal had some excuse to have more conversations with him about cinema. He has an exceptional memory for everything. If I tell you a specific idea or something I want to explore, he has a lot of references about it. It'sexciting."

6) Vocation as a filmmaker?

"Why do I make movies? I don't know. It’s too hard to answer. I can’t imagine myself doing anything else. For me, directing films incorporates all my interests: the observation of human nature, the ability to juxtapose sound and image, and the creation itself, which is something potentially cathartic, liberating and very profound. Creatively, I feel more comfortable when I have a project, a reason to be.”

“One of the reasons why I make movies, part of the adventure that the process entails, is to make this kind of discovery of new souls to put them before the camera, to incorporate them into the stories that I have created. When I worked in television, I always did it with professional actors. And when I was casting for my own films, I was interested in approaching them differently. I don’t like, for example, having an interpreter who I have already seen playing different roles before. I prefer to find people, to discover them on screen, whether they are professional actors or not. I don’t always know how they’re going to turn out, I never do screen tests, I don’t audition, I just know people and sometimes I have the instinct that they would give very well on screen. I don’t think this way of approaching it is exclusive or unusual. Carlos Reygadas, for example, never works with actors. I think it’s riskier, but also more fun and exciting.”

“I don’t know to what extent I’m cosmopolitan, but it’s true that I’ve always felt like an outsider. As a curiosity, in my films I try to avoid those climaxes based on emotional explosions, which I think are often an easy way out. And sometimes I consider myself a typical British in that regard, because those scenes embarrass me a little, they seem to me very obvious. But beyond that, I have never had that feeling of belonging to a single place or a country.”

"I did several episodes of various television series, working on other people's scripts in other people's productions. I was a commissioned director for 13 years. I had not yet developed a personal voice at those times. I wouldn't say I'm exactly ashamed of those jobs, but I'm not particularly proud of them."

"While I'm not interested in sequels, from the first moment I was sure that 'The Souvenir' would be developed in two parts: the first had to focus on the experience of the toxic relationship that I lived, on the bubble that it entailed, and the second should focus on the reaction and the fact of processing it. I could allow a kind of transcendence, that the protagonist could come out of the shadows of that relationship. I want to see the character grow, we’ve seen her compassionate and empathetic in the first part, but the ambition is about to appear. I’m not interested in showing a portrait of a strong woman. I’m interested in the vulnerability, the challenges and, perhaps, the arrogance I remember feeling when I was a film student and I thought I could make a better film than anyone else, that I could be a female Spielberg.”