Inés is a young woman determined to follow her vocation for music. She has set herself a goal that drives her away from her loved ones, and pushes her to the limit. Featuring free filmmaking ways that hybridize documentary and fiction and remind us of the best of independent cinema, Mario Jara follows the path of Inés in her wandering through the streets of Madrid in search for her place in the world, in what is also the portrait of a generation puzzled by not achieving the high standards that assured them were within their reach. A drift that is taking on more and more dangerous faces, and of uncertain end. A film supported by the ECAM.

He was born in Santiago de Chile. He studied Administration at the University of Tarapacá and at the Bernardo O`Higgins University. In his spare time he studied film. He spent some time in Peru and the U.S.A. and finally moved to Spain, where he studied got a Masters in Film Criticism at the ECAM, and in 2009 he debuted as a director with the short film La línea. His second project, Regression, premiered in 2013 at the Cineteca of Madrid. In 2014 he founded an independent film production company, Humberstone Films, finishing his first feature film Año Cero in 2015, with which he won the Ficiqq7 in Chile. He currently collaborates as a film critic with Caimán Cdc. and National Radio of Spain in the radio show Motor Sagrado. He has also been a guest professor at the University of Alcalá. 365 is his latest film. 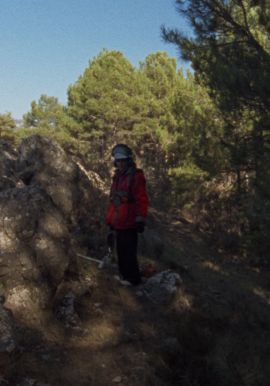