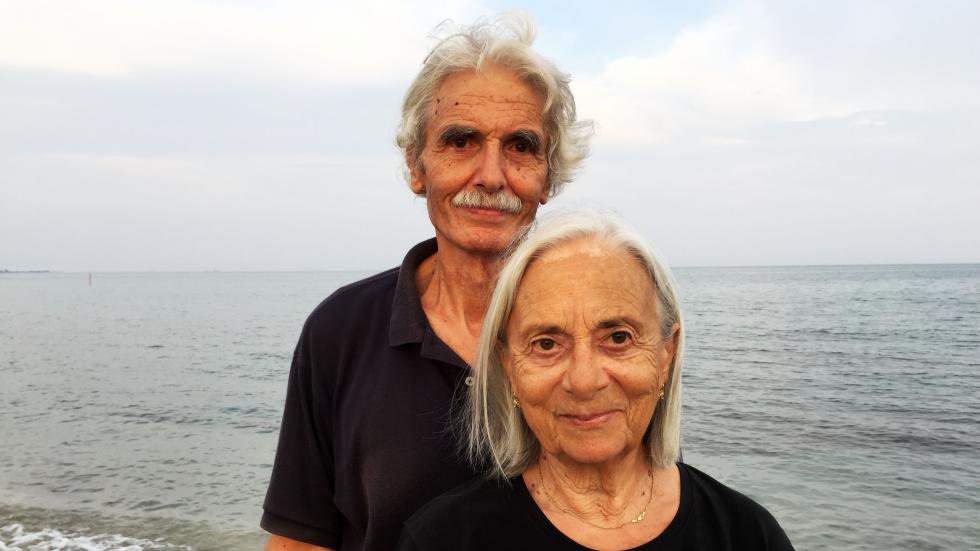 Over 40 years of artistic experimentation and historical investigation, of political and anthropological reflection, in films and installations. Over 40 years of work hand in hand with his companion, Angela Ricci Lucchi, based fundamentally on the reinterpretation of reality through archive images, with a very significant personal position. Now, Yervant Gianikian (Merano, 1942) pays tribute to his late partner in life in 'I diari di Angela. Noi due cineasti', in which he recovers the diaries which Ricci Lucchi kept alive for decades, filled with drawings and words referring to public and private events, travel notes... With the film, which will be seen for the first time in Spain, Gianikian declares his wish to continue with their work and revive the spirit of the artist, with whom he overturned the concept of documentary cinema, with works like 'Ritorno a Khodorciur. Diario armeno' (1986), 'Dal Polo all'Equatore' (1987) or 'Oh! Uomo' (2006). Despite his few public appearances, Yervant Gianikian will come to the #15FestivalSevilla to present the film and to meet with Seville’s filmlovers. We have rescued 15 phrases from the filmmaker in various published interviews  to summarise his  way of seeing art and cinema.

"We are not archaeologists, entomologists, anthropologists, as we are often defined. Rather we are witnesses. Some talk of our work in terms of nostalgia and memory, but that isn’t what interests us. We have used the archive for the present. It is a dialect between yesterday and today. Our films and installations deal with those stories which defined our present as it is. We don’t use the archive in itself, we use what is already made, to talk about today, about us, about the horrors that surround us. The job of the artist is to fight against the violence that envelops us from east and west. From the beginning our work has been against violence to the environment, to animals, against the violence that man inflicts on man".

"We started working in the U.S. in the 70s, at a time when in Italy we were very limited, there was no interest in what we were doing. Between 1975 and 1980 we filmed a lot of our images with our profumati de película (perfumed films) on 8 mm and 16 mm. We were invited to Jonas Mekas’s Anthology Film Archive in New York, to MoMA, and to galleries and cinema in San Francisco, Los Angeles, Minneapolis, El Paso, Philadelphia and other smaller cities. We saw a racist America. En Texas I couldn’t go into certain restaurants because of my moustache, I looked Mexican to them. But where our work was really discovered was in 1979, at a big avant-garde festival in London. The International Avant-Garde Film Festival, and that is where our work was discovered".

"When we started with the archive we weren’t received very well because they said we were using other people’s images, we weren’t artists... Today lots of people imitate us, but we always took a bit of distance". 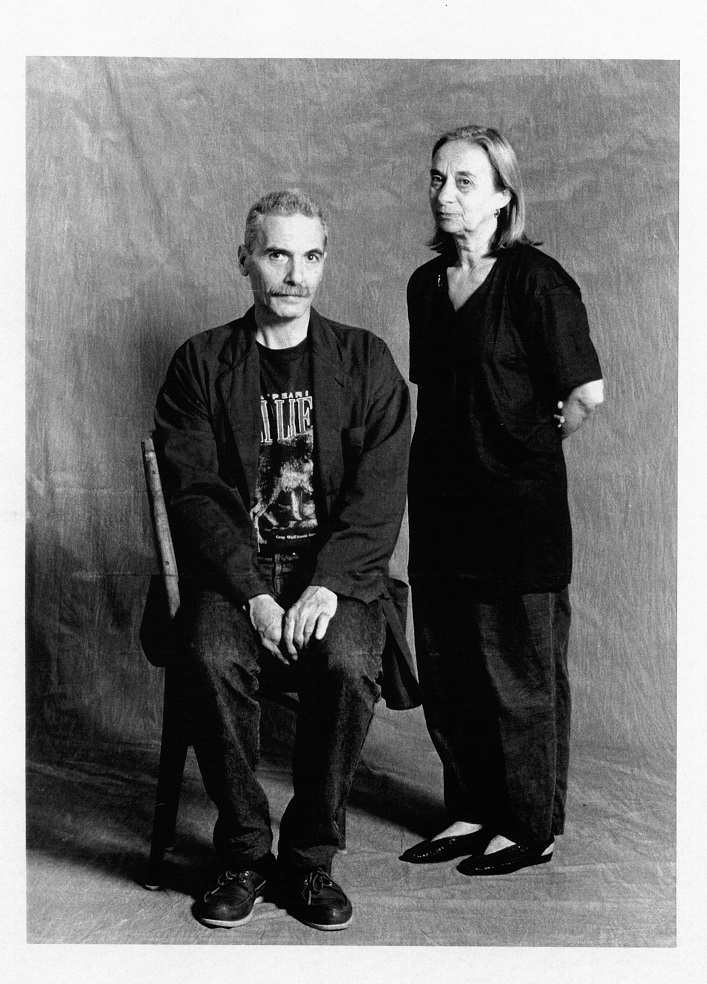 "We can say that we travel cataloguing, cataloguing through the cinema that we are going to re-film. What we do is a repetition of our look, of what we see. We film that parts that might be overlooked. Or because they’re fading due to the film’s chemical composition or because they’re too fast and aren’t noticed in the projection. In fact our method isn’t so much re-editing as re-filming. We recreate the image looking at it. It’s the starting point. And through a loop, a rhythm, the structure and musical nature of the edit emerges. In any case, the material is only slightly manipulated: it’s what it is".

"We always use the example of the soldier who dies, with a fall that you see in two or three almost imperceptible frames. Each frame is an entity in itself with its own specific time. Bearing this in mind, we did a new reading of archive material, we updated it to reexamined it and we broke it down, to capture details capable of revealing the significance of the images. We were resignifying the images. It’s like touching something for the first time with your hands after it’s been hidden for a long time. We activate a reevaluation of the manual displacement of the film through the “analytical camera”, and that brings out aspects that are invisible during normal projections, so that we can recognise the signs and obtain the deep significance of the image".

The 'analytical camera’ (a special device created by Gianikian and Angela Ricci Lucchi, which allowed them to film again, enlarge the image and, literally, enter into it).

"The analytical camera lets us work on the physical aspect of the image. At times we’re interested in the signs left on the reel by collectors and projectionists, like the burns due to the film stopping in front of the incandescent bulb. The mark left by men gets our attention, but also that left by time. We are struck by the sign of consumption, deterioration and the chemical decomposition of nitrate. Also, the concept of materiality combines with the impression of lived images. They suggest the idea of a consumption of the visual element unleashed by those looks that saw them, mostly private looks, as the spectator was very often the one projecting those images, even touching the film and leaving his prints on it. We are copyists, replicating cinema to avoid its dissolution".

"We never recognise ourselves within experimental cinema. The films or videos we shoot follow the tradition of avant garde cinema, and maintain a continuity with our artistic investigation".

"Each filmic field is reflected in an absent field, the place of a character who is positioned by the imagination of the spectator, and whom we will call the Absent. At a certain moment in the reading, all the objects in the fílmic field combine to form the significance of their absence. In some way, we try to give an identity to the nameless".

"Has that comparison been greatly abused? The aesthetic and the ethical go hand in hand. Why would it be otherwise? We’ve always taken risks. This way of operating was instinctive for us. We’ve always worked with images that attracted us, and under each one of these images runs the river of history. Our films are generally silent, without words. Yet we know exactly where we are".

"Our work method, the analytical camera, our hands, our lenses, the film that works manually: in all the archive materials that we use for our films we see the present, because everything that is happening today is a repetition of what has already happened. We have always operated, for example, around the limits, in the confines of war: the first time was Armenia, but we also did it in the former Yugoslavia. Historic moments repeat themselves. The word “return” has been key in our career: ours is a continuous return to History".

The true face of violence

"The aim of our work is to show the true face of violence. To do that, we reflect on the images, we analyse them, we convert them into dialogue, we interact and even collide: we try to create the conditions that allow the images to produce electric shocks, a fact that explains the title of 'Frammenti Elettrici'. That effect implies a particular attitude by the public, who are asked to interpret and elaborate the images; it’s a difficult job that exposes the spectator to strong, violent representations, as happens precisely in the cube where you can suddenly find yourself in a nightmare".

A job with responsibility

"Regrettably, making films about the war doesn’t mean stopping it. But we know that our work is destined for an audience. When we stopped making fragrant films we did it because we understood that it was to move to another dimension. We started shooting, like when we went to the Soviet Union before and immediately after the collapse of communism. We chose a path. Difficult, but necessary".

"We always favoured our installation works, which fitted perfectly with the space and, at the same time, they represented the lesser known part of our artistic investigation. I was the one who drew the room, I selected the sequences that would be shown there and worked on the rhythm of the images. This last aspect is crucial, because when each screen shows a different extract, the square space seems to contain a complete humanity that moves frenetically and uneasily".

A review of the world

"America is so complex... If I were American, I wouldn’t have voted in the last elections, I’d have abstained. Their president is a madman, even his own party didn’t want him. We’re in a very dangerous period, with NATO on the borders of Eastern Europe, with the war in Syria and Iraq. The Americans have carried out a disastrous policy and our poor Europe has disappeared. Tump’s election was accompanied by a growth of the right wing and policy changes in Germany, France, Italy..."

"This film is my memory of Angela, of our life. My desperate attempt to bring her back to my side, to make her live again, the continuation of our work as a purpose, the mission through her notebooks and drawings, a kind of map for acting now, which contains the guidelines and provides the continuation. Angela and I have prepared important new projects to carry out. The promise, the oath, to continue working".