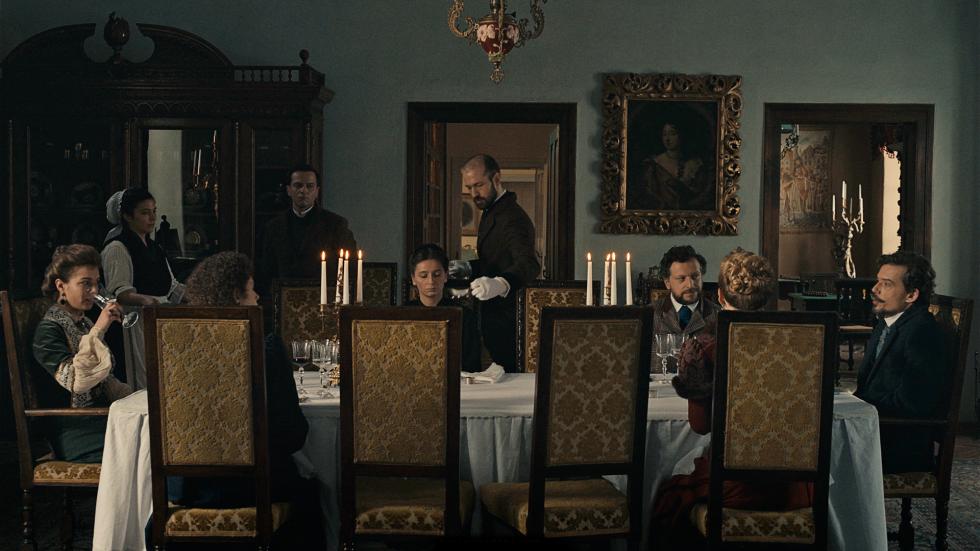 The International Jury of the Official Section of the Seville European Film Festival 2020, formed by Rosa Bosch, Frédéric Niedermayer, Carlos R. Ríos and Luis Urbano, has decided to award the following films:

“You don't usually get the chance to feel like you're dealing with a masterpiece. We were impressed by the potential of the film of a great director. A film that takes place in 19th century Russia, and yet never stops talking about us. In times of pandemic, the fog in which the film ends resonates in a particularly lasting way among us.”

“A unique and colossal piece of work about Spain's past, present and future, the film allows the voice of the people, so often silenced, be heard. Through its bold cinematographic language, it ends up constructing, with great precision and disarming sincerity, a kaleidoscopic portrait of several generations, exemplified above all by the accurate use of the split screen.”

“For its original and moving story, as well as for its narrative approach, offering any kind of present viewer, through multiple readings, the possibility of reflecting upon it.”

Directed by: Ivan I. Tverdovskiy

“For his accurate approach and careful staging in dealing with an event of enormously tragic dimensions, allowing the viewer to reflect upon Russia's historical memory today.”

“For its ability to convey passion and emotion.”

The Jury of the New Waves_Non-Fiction of the Seville European Film Festival 2020, formed by Paolo Pisanelli, Alejandro G. Salgado and Elena Subirà, has decided to award the following films:

“Little Girl is a beautiful film with an unquestionable cinematographic balance and great sensitivity. It stands out for its honest storytelling and its ability to generate an intimate dialogue with extraordinary prudence, respect and distance. The jury wants to emphasize the wisdom of the formal and discursive choice when dealing with a subject as complex as gender dysphoria especially at an early age as the protagonist, in addition to the appropriateness of placing the conflict outside the household and family environment. Finally, it should be noted that beyond its cinematographic quality, it is a work of significant educational value and awareness in contemporary society, which remains very detrimental. Petite Fille has a powerful point that really hits us!”

“Nueve Sevillas is a never ending film. We award it because it plays with the language of cinema, it is brilliant, dynamic, surprising but also intense and moving, it makes us breathe the air and the dust from the streets of Seville. It is the temptation of an aimless journey that activates both the senses and all the muscles of the body becoming an eccentric exploration of words, songs, music, and dances that revolve around the world of flamenco, as well as the concept of flamenco through the talent and creativity of exceptional artists and performers. Polyphony and noise, harmony and rhythm, visions and passions ignite the screen and throw sparks into the eyes of the audience - blessed are those who sit in the cinema seats!”

The Jury of the 2020 Seville European Film Festival, formed by Carlota Moseguí and Mireia Mullor, has decided to award the following prize:

“For being a provocative reading on the impossibility of accepting the feminicide stylization typical of the classic giallo in the current context, where society rejects the representation of violence against women.”

The Jury of the 2020 Seville European Film Festival, composed by Marina Díaz and Lourdes Palacios, has decided to award the following prizes:

“This complex historical and visual research work is offered as a clear argument in favor of the memory of Galician women that worked in the factories of the early modernization of the 20th century, and later suffered the consequences of the industrial conversion. The delicate approach through documentation and the reconstruction of the imaginary around them, the context and their lives is embodied through the portrait of several women, real protagonists of the story. Accompanied by other witnesses of the tradition, younger women revisiting these memories as a contemporary artistic discourse. We would like to give a special mention to the sound treatment in the film, which, without a doubt, is crucial to state -even more- the impressive value of the images that make up the documentary.”

The FIPRESCI Jury of the 2020 Seville European Film Festival, composed by Enric Albero, Luminita Boerescu and Luiza Lusvarghi, has decided to award the following prize:

“The FIPRESCI jury was impressed by the precision and meticulousness, reminiscent of a watchmaker, with which the director Sabrina Mertens evokes the suffocating universe of the family in which her heroine lives. The monotony of everyday life, in the closed universe of the house in which she grows up, her repressed feelings, the obsessive-compulsive depressions of her collector mother, the house like a bunker from which nothing is thrown, not even the slaughtering pigs tools of the grandfather, proudly kept in an old chest, all are analyzed as if under a microscope by the camera, in a narrative unfolding reminiscent of the fixed frame of some photos from an old album. The film surprises! As it unfolds, the viewer is at first amazed, then outraged, shocked, suffocated, but captivated by these people with mental disorders, who live in a micro universe reminiscent of the universal macro in which we all live.”

The audience of the Seville European Film Festival 2020 has decided to award through their vote the following prizes:

The Jury of the 2020 Seville European Film Festival, formed by Piluca Baquero, Manuel Blanco and Chelo Loureiro, has decided to award the following film:

“For the very thin line that has always separated, since the beginning of cinema, the fiction from the documentary. And for the courage to narrate, with evident austerity of means, a vibrant and authentic minimal story.”

The ASECAN (Association of Andalusian Film Writers) Jury of the Seville European Film Festival 2020, composed by Arturo Andújar, Ignacio Ortega and Manuel Sayalonga, has decided to award the following films:

Film: OF HEARTS AND CASTLES

"For the way the camera, through a formidable structure and the honest interpretations, manages to collect the looks, gestures and emotions."

"For its excellent handling of the narrative through the technique of collage between images and sounds, to represent the pandemic world in which we live, beyond the disease."

"For its solid plot base and its authenticity as an original text with action taking place in the peripheral neighborhood of La Paz in Ecija."

"For narrating those increasingly forgotten stories of rural areas in the process of being abandoned, which make up the memory of a territory marked by and for labor in the countryside."

The ASECAN (Association of Andalusian Film Writers) Jury of the Seville European Film Festival 2020, formed by Arturo Andújar, Ignacio Ortega and Manuel Sayalonga, has decided to award the following film:

"For the sincerity and intensity with which it addresses the high emotional content of this story of longings and desires, where friendship and love are fused."

The Women In Focus Jury, represented by AAMMA (Asociación Andaluza de Mujeres de los Medios Audiovisuales), of the Seville European Film Festival 2020, made up by Teresa Arbolí, Rafaela Rodríguez and Helena Sevine, has decided to award the following film:

Film: FUCKING WITH NOBODY

"For being an original transgressive and groundbreaking film, which breathes and makes us all breathe freedom. For placing us in front of topics as current as the trivialization in social media or the deconstruction of the myth and the idyllic love story. For promoting diversity and for showing us an enterprising woman in whom we can feel identified. A complex film containing many readings that, through the numerous microuniverses it addresses, calls for continuous analysis and debate. In parallel, we find it to be a very inspiring film for all the women who work in the film industry."

The jury, organized by the Association Culture with Pride which organizes the 7th edition of the LGTBI Film Award of the Seville European Film Festival 2020, made up by Javier Paisano, Mila Fernández, Manuel Rosado and Piermario Salerno, has decided to award the following film:

“For offering us a profound and enlightening look at the struggle that Sacha's family is maintaining against a suffocating bureaucracy and the suffering of their 7 year old trans daughter.”

The Jury of the Forum of European Co-Productions of the Seville European Film Festival 2020, formed by José Fragoso, Sara Santaella and Marta Velasco, has decided to award the following projects:

"For both the originality of the subject and its natural perspective on the technical and artistic co-production that will enable between Portugal and Spain."

"Because it will be a bold comedy that will break away from molds and stereotypes.”

"Because this story needs to be told and we want to make it happen with this award."