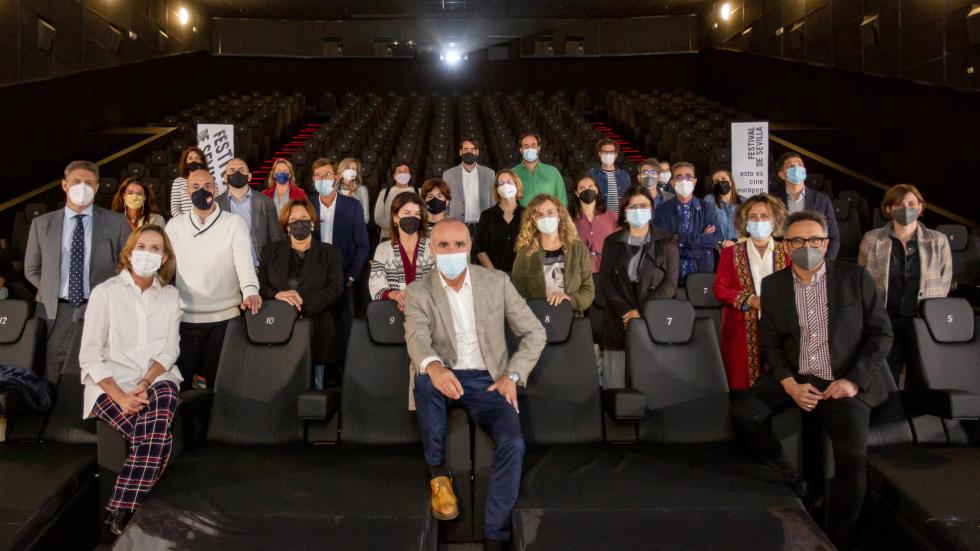 INGRID AND GRETA GARCÍA JOHNSSON WILL HOST THE OPENING CEREMONY

The Sevillian actresses will draw the public’s attention at Teatro Lope de Vega, together with Julián Villagarán displaying his musical talent, all being the representatives of a generation linked to the festival since its beginnings

The band Vetusta Morla will participate in the special premiere of ‘The daughter’ next November 10th, playing the main track of the last Manuel Martín Cuenca’s film

Seville, November 3rd, 2021.- The 18th Seville Festival edition is prepared to make the city of Seville the capital of European film for nine days. Between November 5th and 13th, the festival will offer more than 230 films for all kinds of public and will accommodate tens of ground-breaking and brave European filmmakers.

The festival will officially start with the opening ceremony to be celebrated at Teatro Lope de Vega next November 5th. The ceremony will be hosted by the sisters Ingrid and Greta García-Johnson, followed by Julián Villagrán’s musical performance ‘Asunción’. In this case, the three Sevillian performers haven been familiar faces of the festival since they were young, now being consolidated artists.

With the selection of this trio of interpreters for the hosting of the opening ceremony, Seville Festival aims to praise a generation that has grown up with the festival both withing and outside cinemas, and that is reaching maturity. In the same way, SEEF is turning 18 in this present edition, consolidating its place as a referent to the best European film. Therefore, the opening ceremony encourages that restless essence which characterises the young audiences that crowd the cinemas during the celebration of the SEFF.

This is what José Luis Cienfuegos, head of Seville Festival, explained during an event carried out in mk2 Cinesur Nervión Plaza cinemas, one of the official headquarters of the festival, having the participation of Antonio Muñoz, deputy major of Seville Town Hall and municipal delegate of City Planning, Culture and Tourism, as well as of María del Mar Sánchez Estrella, secretary-general of Cultural Innovation and Museums. Additionally, this event was attended by a large group of representatives and institutions which have shown their permanent support for the development of a strong and prominent festival.

During the opening ceremony, the Hungarian filmmaker Ildikó Enyedi will be awarded the Seville Festival Honorary Award, a new distinction created by the festival for the appreciation of filmmakers with personal and original work and that constitute the living history of European film. In addition, Enyedi’s film, The story of my wife, a romantic drama starred by Léa Seydoux, Gijs Naber and Louis Garrel, can be watched at Teatro Lope de Vega on November 6th.

This film adapts the homonym novel published by Milán Füst in 1942, narrating the romance between a ship’s captain and a mysterious woman. Enyedi already had a retrospective displayed in Seville back in 2018 where all her movies were screened, for instance, My 20th Century (1989), Golden Camera in Cannes, or On Body and Soul (2017), Golden Bear in Berlin.

The most living and subversive Spanish film will be represented at Seville Festival by some of the most interesting directors of our cinematography. Among them there will be the Sevillian Santi Amodeo, presenting Las Gentiles, a film where he retrieves the independent nature of previous works such as Dog’s Head (2006), Astronauts (2003) or his debut, Pilgrim’s Factor (2000), co-directed with Alberto Rodríguez.

Further strong films in this festival are Holy Spirit, an incredible transition to feature film by Elche film director Chema García Ibarra, who arrives to Seville having received the Special Mention in the last Lorcano Festival, for short films such as The attack of the robots from Nebulose-5, Protoparticles or Mystery, awarded in Berlin and Sundance festivals. There will also be the debut of Granada film director Violeta Salama, who will be present at the screening of her dazzling

Other two refreshing figures from our film industry are Liliana Torres and Miguel Ángel Blanca. She will present What have we done wrong? her third film after

Family Tour (2013) and the documentary Hayati (2018). And he, author of films such as I want the eternal or After the happy generation, will do the same with Magaluf Gosht Town, which will come to Seville having won the Best International Movie Award in Thessaloniki Festival.

And finally, the Andalusian Gonzalo García-Pelayo, an unconventional veteran, who will premiere in Seville his two last works, Ainur and Stop prohibiting since I am failing to break every single law, two films that form part of the ambitious project of shooting seven films in one year. Two further veterans that will bring their new films to Seville are Benito Zambrano (winner of three Goya awards for Alone and Open Sky), who will premiere Lemon bread with poppy seads, and Manuel Martín Cuenca (The author, Cannibal), who will bring his work The daughter.

Vetusta Morla, during the premier of ‘The daughter’

One of the surprises revealed in today’s event was that Vetusta Morla, one of the most relevant bands of indie music on a national level and authors of The daughter’s soundtrack, will participate in the film’s premiere on November 10th. They will play The queen of the trenches, the main song of Manuel Martín Cuenca’s last film.

The best authors of European film here in Seville

Among the European directors that will arrive to Seville, it is possible to mention Jacques Audiard, who will inaugurate the festival with his last film, Paris, distrit 13 and directed relevant films such as My heart stopped from beating (Golden Giralillo in Seville 2005), A prophet (Jury’s Big Award in Cannes 2009), Dheepan (Golden Palm in Cannes 2015) or The sisters brothers (Silver Lion for the best artistic direction Venezia 2018).

Three-time winner of the Jury’s Special Award in Cannes, for Red Road (2006), Fish Tank (2009) and American Honey (2015), the British director Andrea Arnold will present her last feature film, Cow. The German Olivier Hirschbiegel, director of The sink, will join the premier of his last experiment, The Painter. The French Mathieu Amalric, known as much for acting as for his prestigious filmmaking in works such as Tournée (2010) or Barbara (2018), both awarded in Cannes, will do the same with his recent Hold me tight.

Rodrigo Cortés, director of Contestant (2007), Buried (2010) or Red lights (2012), will come to Seville too with his new feature film Love in its place, where he proposes an unusual approach to the Nazi holocaust, being, at the same time, a celebration of theatre which occasionally acquires a musical film tone. And the Portuguese filmmaker Miguel Gomes (awarded in Seville for his trilogy The thousand and one nights, and author of Aquele Querido Mês de Agosto or Taboo) will present, together with Maureen Fazendeiro, their last film together, Otsoga Diary. Finally, the festival will have the English director Mark Cousins, master of the essay film, who comes back to Seville to present his two last films: The Story of Film: a New Generation, which updates his work in The Story of Film by incorporating the last decade film, and The Story of Looking, an adaptation of his own homonym book on how we preserve the world that surrounds us.

Two big names will come to Seville to present their corresponding films as well as to collect an award. On the one hand, the Spanish-German actor Daniel Brühl

will be awarded with the City of Seville Award, which aims to recognize a lengthy career as an actor, including prominent films such as Good Bye, Lenin! (2003), Salvador Puig Antich (2006), Inglorious Basterds (2009) or Captain América: Civil War (2016). On top of this, he had just started as film director in Next door, which will be watched by Brühl at the festival.

Furthermore, the 18th Seville Festival edition will have filmmakers awarded by the most important European festivals. For instance, the famous Israeli director Navad Lapid, who won the Jury’s Award in the las Cannes Festival for Ahed’s Knee, and who had previously won the Golden Bear in Berlin for Synonyms (2019) or the Silver Giraldillo in Seville for The kindergarten teacher (2015). Or Sebastian Meise, who will present Great Freedom, winner of the Jury’s Award in the section Un Certain Regard in the last Cannes Festival, as well as winner in Sarajevo and Athens. Or the Georgian director Aleksandre Koberidze, who will present his second feature film, What do we see when we look at the sky? winner of FIPRESCI award in the last Berlinale.

The new Greek cinema will be represented in Seville by two important icons and protagonists of much talked-about debuts: Araceli Lemos will bring her first feature film to Seville, Holy Emy, awarded as the best first work in Locarno 2021. The Athenian Jacqueline Lentzou will do the same with Moon, 66 Questions, premiered in the Berlinale and winner of Cineuropa in Sarajevo.

The Italian Michelangelo Frammartino will also visit the city. He will present Il Buco, winner of the Jury’s Special Award in the last Venezia Festival. In addition, the Serbian Stefan Arsenijevic, winner of the Chrystal Globe in the last Karlovy Vary Festival for As far as I can walk, and whose career took off with the winning of the Golden Bear and the Oscar nomination for his short film (A)Torzija (2003), will be here too.

Finally, the Ukrainian Sergei Loznitsa, a familiar face and regular visitor of the festival, will participate too. Loznitsa already won the Golden Giraldillo in 2018 for Donbass, the very same year he presented two other films, Victory Day and The Trial, a rather unique circumstance in the festival history. This year, he will present his last film Babi Yar. Context as part of the New Waves No Fiction section (a section he already won in Seville 2015 for The Event). This work was presented in Cannes, where it received a Special Mention in the Golden Eye award.

An international jury for the most ambitious Official Section

Lastly, the event celebrated today was meant to announce a list of relevant figures in the different filmic, European categories that constitute the Jury of the Official Section. This will be formed by the German director Christian Petzold (Golden Bear in Berlin for Bárbara, and awarded as Best Director for Ondina in Seville last year), the Greek filmmaker Christos Nikou (last year’s winner of Seville Festival’s New Waves section for Apples), the producer Cristina Hergueta (having films presented in events such as San Sebastián Festival, Seville Festival, Transylvania Festival or Visions du Réel), the producer María del Puy Alvarado (Oscars nominee for Madre, and The Mole Agent) and the Romanian director Alina Grigore, winner of the Golden Shell in the last San Sebastian Festival for Blue Moon, a film which will be available in Seville for a special session.