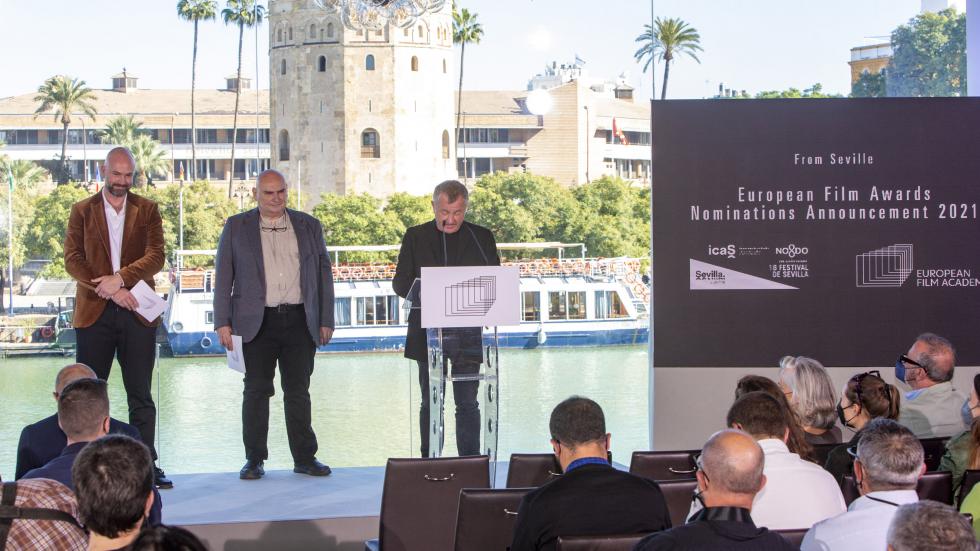 Titane, El padre and Quo Vadis, Aida, are among the 22 feature films nominated in four categories.

Sentimental, by Cesc Gay: the only Spanish film in the running for the award in the Best Comedy category.

Seville, November 9, 2021-. The Seville Festival hosted, following tradition, the official reading of the nominations for the 34th European Film Awards organized by the European Film Academy (EFA), which will be celebrated in Berlin on December 11th. Antonio Muñoz, delegate for Culture of the Seville City Council; José Luis Cienfuegos, director of the Seville Festival; producer Mike Downey, president of the EFA; and producers Antonio Saura, representative of Spain and Portugal in the institution, and Matthijs Wouter Knol, new director of the European Film Academy, were present for the announcement of the 22 finalist productions for these awards at Abades Triana, in a ceremony presented by Concha Ortiz.

"For us, the film festival brings a lot more than the screening of 200 films: the support of the public and private institutions that contribute to the city," said Antonio Muñoz. "We wear the European slogan and we are proud of it. Europe is in need of development and we need to contribute from the political sphere, so we are doing our part. Cinema is culture and culture is tolerance," added, thanking the European Film Academy for its ongoing commitment to Seville.

"It's exciting to be back in Seville - who would have thought in early 2021 that we would meet again at festivals in Europe?" he said. After last year's online ceremony, it's important to meet again in person. Also, this year the European Film Academy was able to evaluate more films than ever before: there was a lot to choose from, films showing a lot about the world we live in today," explained Mike Downey, before giving the floor to Matthijs Wouter Knol to preview some format changes for the EFA awards gala.

"It's important to increase the visibility of European cinema on our continent and beyond. There is no shortage of great European films this year," commented Wouter Knol. "European cinema is for everyone, but it is still not known enough. We want to work to change this in the coming years, and this year will be a small first step. The EFA ceremony will mix a long list of face-to-face guests in Berlin with several surprise appearances that will connect with us from all over Europe," he commented.

Three feature films already released in our country emerge as the big favorites at the European Film Awards 2021: Julia Ducourneau's Titane (up for Best Film, Directing, Actor for Vincent Lindon and Actress for Agathe Rousselle); Florian Zeller's The Father (Best Film, Directing, Screenplay and Actor for Anthony Hopkins), and Quo Vadis, Aida by Jasmila Žbanić (Best film, direction, screenplay and actress for Jasna Djuricic), which could be seen at the last edition of the Seville Festival.

The only Spanish film presence among the nominees is Sentimental, Cesc Gay's adaptation of his own play, Los vecinos de arriba. Starring Javier Cámara, Belén Cuesta, Griselda Siciliani and Alberto San Juan, the film is up for Best Comedy.

The Seville European Film Festival, a platform for the nominees

In addition to hosting this first event of the season of the EFA Awards, the Seville Festival is being a platform for several of the nominated films and also for those that have been pre-candidates. Five of the 22 feature films in the running for the top European film awards can be seen in this 18th edition of the SEFF, plus one additional film that participated in last year's Official Section. Furthermore, about twenty of the 53 pre-candidate productions to be nominated are part of the festival's program.

The five feature films nominated for the European Film Awards that the Seville Festival is screening these days are Great Freedom (which is part of the Official Section), Flee (which participates in New Waves and is in the EFA Section Selection), Babi Yar. Context, by Sergei Loznitsa (New Waves non-fiction), Compartment no. 6 (EFA Section) and The Worst Person in the World (EFA Section).

THE "CINEPHILE WINDOW" REINFORCES ITS COMMITMENT TO FUTURE SPECTATORS

A CINEMATIC JOURNEY IN A EUROPE UNDER CONSTRUCTION