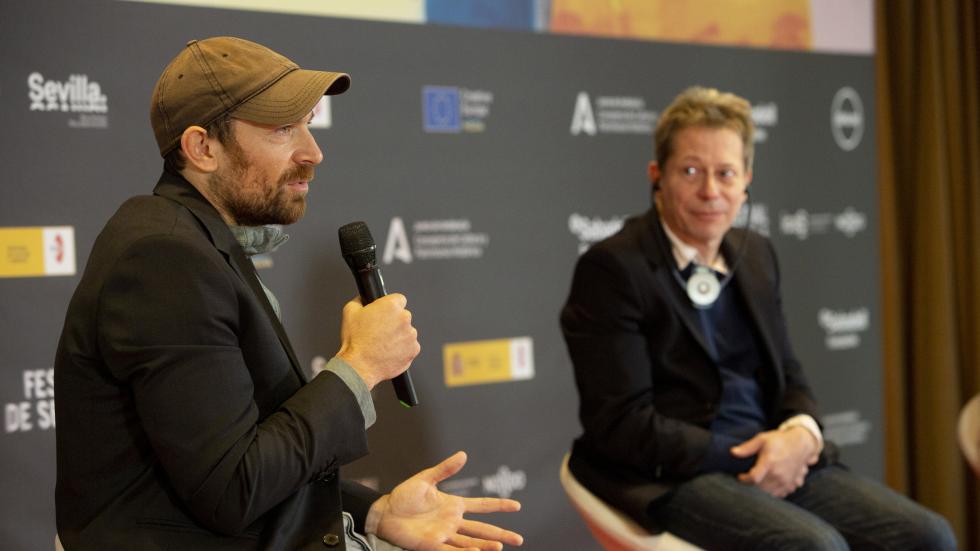 The French actor and director has presented to the press Hold Me Tight, one of the gems of the New Waves section

Seville, 12th November 2020.- A highly acclaimed interpreter for filmmakers such as Roman Polanski (Venus in Fur), Bertrand Bonello (On Guard), Eugène Green (The Brigde of Arts, The Signs, The Son of Joseph), Alain Resnais (Wild Grass, You Ain’t Seen Nothing Yet), Julian Schnabel (The Diving Bell and the Butterfly), Tsai Ming-liang (Face), Wes Anderson (The French Dispatch, The Grand Budapest Hotel) and Steven Spielberg (Munich). A fetish actor for Arnaud Desplechin (A Christmas Carol, My Golden Days, Ismael’s Ghosts, among others). He even played the perfidious villain in a James Bond film (Quantum of Solace). Winner of three César awards, Mathieu Amalric's acting career speaks for itself, as well as his parallel career as a director.

He debuted with Mange ta soupe (1997), has made several short films, with On Tour (2010) he won Best Director and the Fipresci award at Cannes. And with Barbara (2017) he won the Giraldillo de Plata award for his direction at the Seville Festival. Now he returns to Seville with Hold Me Tight, which is about a woman who apparently abandons her husband and children. Vicky Krieps, unforgettable in Phantom Thread by Paul Thomas Anderson, and whom we saw this summer in M. Night Shyamalan's Time. She is the star of a film that, in Amalric's hands, becomes a puzzle that plays with temporality, with the inner voice of the main character in her emotional crisis and with the fundamental clash between reality and the imagination.

Accompanied at the press conference by actor Arieh Worthalter, Mathieu Amalric began by talking about the conception of Hold Me Tight. ‘We started from a text by Claudine Galea, Je reviens de loin, which doesn't look very much like the idea of a play that we usually have. It is a set of thoughts, of monologues, one of the characters only expresses himself through poems... The book made me cry. There is something, a gesture of the main character, who says to herself: It is me who left. Something about this supposed escape is bordering on madness. And then there is what is provoked by the absence of this woman in her family. Crying didn't immediately make me think that there was a film in the book, but it had provoked something in me.’

Arieh Worthalter, the film's male lead, spoke of Amalric’s very free and unconventional way of working: ‘Mathieu is not at all controlling. He knows what he wants to do and what he wants to tell, but he leaves you a lot of room to improvise. We always know where we are and we can bring aspects to our character. Mathieu tends to change scenes every day, he brings new things every morning, but we don't talk about them too much, he lets things happen during the shoot. It's a process that flows, perhaps more dangerous than other types of filming, but very interesting.’

On this living and changing process, with the script being rewritten every day, the filmmaker commented, ‘There is a lot of previous work, tons of written notes, and it is very interesting to take it as a starting point until we reach something that can be shared with the actors and the rest of the team. In addition, I know many of the technicians, the cameraperson, the sound engineer for more than twenty years and they all shared with me before the exact chronology of the story we are going to tell, so, no matter how many changes we propose, we always know what we are shooting. The important thing is to find the right device to create a working environment where things happen, where ideas emerge and make the process more lively and exciting for everyone.’