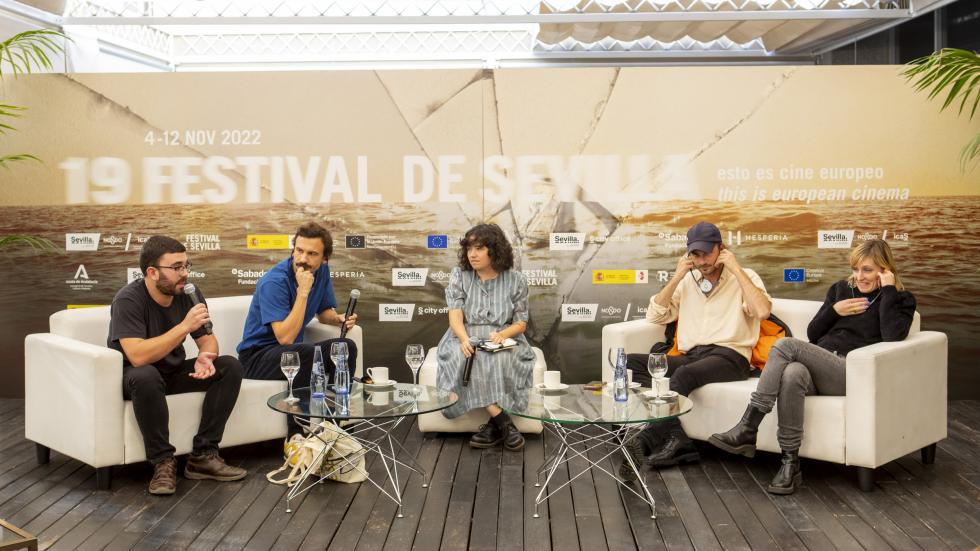 The festival’s last roundtable brought together five directors, who each revealed the variously personal and historical roots of their shortlisted films

On Friday 11 November, Seville Film Festival’s Un café con series closed with two sessions, offering a final dose of caffeine and insight into directors’ worlds and work. The first session welcomed the directors of Safe Place, Remainders and Lucie Loses her Horse, while the latter invited the directors of Tommy Guns and Titina to the white sofas which, over the course of the festival, have furnished and hosted these daily conversations with filmmakers and their collaborators.

In the first of these last discussions, French director Claude Schmitz told of how his patchwork fantastical tale, Lucie Loses her Horse, was in fact deeply rooted in reality. Calling on the true experiences of his longtime friend Lucie Debay – a mother and actress, who joined Schmitz on the sofa – the director used “simple, real facts to construct the story”, and fused these “with a metaphorical, fantastical structure” that counts Alice in Wonderland among its many references. The result is a film that straddles cinema and theatre, combines armour with neon lights, and uses “the metaphor of the knight-errant” to address the constant “idealistic search” of the actor, and the internal conflicts Lucie grapples with in balancing a devotion to her daughter and her work. As Lucie comments: “I am the character, but I am also myself”.

If Lucie Loses her Horse is a thematic and audiovisual puzzle, Juraj Lerotić’s Safe Place was, the Croatian director recalls, “a paradox” in its process and fruition. Alsocoming from a deeply personal point of departure – specifically, the director’s experience of losing his brother to suicide – trauma is the film’s centre of gravity, though Lerotić initially had no intention of translating his grief into a creative project. He simply began putting pen to paper, as a way of exploring his awakened fascination with how “life can get out of control so quickly”. When his script, to his own surprise, attracted a producer and funding, he then, to his further surprise, opted to himself “play the leadingrole”; the quietly devastated Bruno who, along with his mother, desperately seeks to support his suicidal brother, Damir. The film’s unflinching exploration of what both individuals and families are driven to do, when a labyrinthine health system “can’t or won’t help you”, saw Lerotić, who collect Best Feature Film and Best Actor awards at Sarajevo Film Festival, and three awards at Locarno, where the film premiered.

Where Schmitz and Lerotić’s films translate true experiences into fictional scripts, Raúl Capdevila’s “Western documentary”, as Seville Film Festival aptly describes his latest non-fiction feature, Remainders, saw the Spanish director turn a lens directly onto his family’s small farm, coming under pressure from the Corporation Next Door. Although the film is firmly grounded in the director’s native region of Aragon, the issue he explores is, as Capdevila notes, something happening “not only in my village, but all over the world”. In a creative departure from strait-laced observational documentary, Capdevila adopts themes and stylistic elements, like music and titles, from the Western genre, and replaces a cowboy with a farmer – his father – who “ends up participating the hegemonic economic system, which condemns him to integrate or disappear”. When asked how his family members felt about appearing in his film, Capdevila echoes Lerotić in recalling that “it was an organic process”, where his father didn’t so much see himself as featuring in a film, as simply putting aside a weekend for his son.

The second conversation united the directors of two films about conquest: of the impossible and of territory. Titina, a hand-drawn 2D animated comedy from Norwegian director Kajsa Næss, about “a very famous dog in the 1920s”, on paper appears to share little in common with Carlos Conceição’s latest feature, Tommy Guns, which addresses the allure of war and spectre of colonialism. But as their coffee-table conversation revealed, both films centre on ambition and the hubris of men who seek to become heroes.

Titina –one of seven animations selected for this year’s festival– illustrates the “untold story” of the Norwegian explorer Roald Amundsen in 1926 partnering with Italian airship engineer Umberto Nobile – and his small dog, Titina – to explore the North Pole. Innovatively combining archive material with animation, over 350 people worked on this tale of three core characters, whose expedition ultimately ended in bitter rivalry. As the animator and animated speaker explained, her film is a comedy, but one intended for children and adults alike, that doesn’t shy away from darker subjects rarely explored in animation, like nationalism and death. Næss relished the opportunity to represent “the biggest hero in Norway from a different angle” and, as she found “fun to recognise”, the “childish” feud between two iconic figures.

Næss’s film is rooted in a true story, which she researched intensively through Norwegian archives and trips to Italy, and while Tommy Guns too is set in a particular time and place –specifically, Angola in 1974, the year before the former Portuguesecolony gained independence– the director stresses how he actively sought to maintain a strong element of ambiguity. The Angola-born Portuguese filmmaker highlights that the film “does not deal with any kind of reconstruction or documentation”, but rather seeks to, in broader strokes, address fought conflicts, fascism and colonialism in a way that “someone who knows more about the wars in Vietnam, Iraq or Korea could trace parallels with their own experience”.

Much like Næss saw her (non-canine) protagonists acting like “small boys” in their feuding, Conceição similarly sees an “almost child-like complicity” in the soldiers that enacted the violence of colonialism. As he reflects with both horror and a degree of empathy, “they are engaged in criminal acts, but they are victims of the manipulation of their minds”. In voicing his hope that Tommy Guns alerts viewers to “the dangers of cyclical movements” like nationalism and fascism, that are resurfacing across Europe today, Conceição delivered an affecting finale to the festival’s Un café con series, which left attendees with empty coffee cups, but a lot of food for thought.