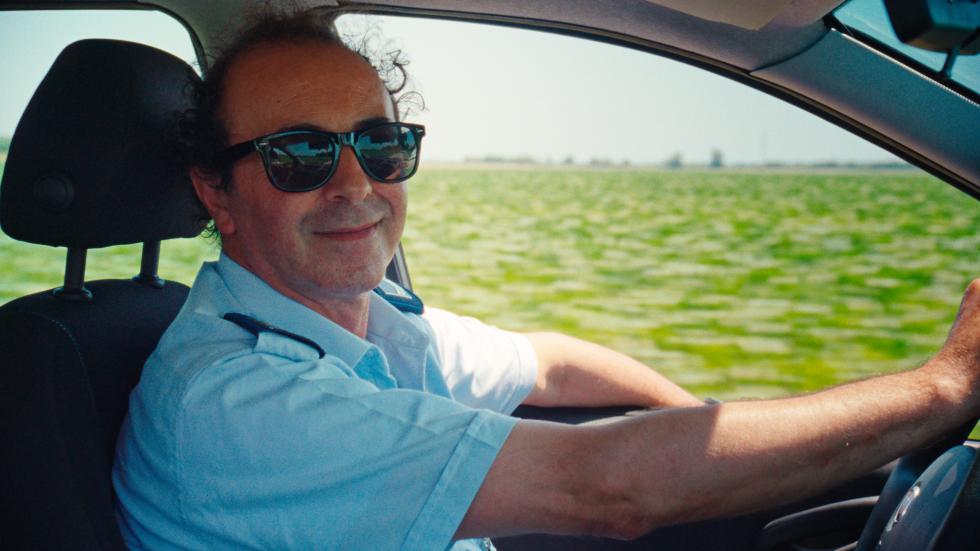 Gigi is a police officer from a small town in Veneto, where nothing seems to ever happen. One day, a girl kills herself under a train. It is not the first time. In Gigi’s patrols, with his service car, a strange provincial world emerges between reality and fantasy, where a garden can also be a jungle and a police officer has a heart that is always ready to fall in love and smile.

San Michele al Tagliamento, not far from Venice. A piece of Italian province made up of people, souls with particular characters. The Italian director Alessandro Comodin has created in his third film (after L’estate di Giacomo and I tempi felici verranno presto) a small masterpiece, a human movie with a sense of humanity. The director focused his attention on Gigi, a traffic policeman who is actually the director’s uncle himself (Pier Luigi Mecchia). Flat calm reigns over the city, which is expressly mentioned in the many conversations on the microphone with the central, from the typical residential urbanism widespread in the many houses with gardens like that of Gigi: a garden with tall trees, which the policeman considers as something sacred. He does not cut them because that garden represents his “comfort zone”, similar to a mental garden.

A serious event takes place in that city: the remains of a poor woman, evidently suicidal, are found on the train tracks. Gigi and his colleague deal with it with a certain reluctance. We have to call the authority and the railways that should stop the passage of trains. However, a convoy already passes. It seems that time has stopped in that territory, always crossed by a smiling Gigi.

The film belongs to a road movie, where the roads traveled are always the same. Comodin exploits this feature in a game of fields and counter-fields, just as at the beginning we do not see the interlocutor of Gigi who he discusses in the garden and remains off the field. For example, in a scene where the car is framed by the windshield, it is clear from the noises that it is in front of the reverse shot of the level crossing. A colleague of Gigi often appears surprisingly, as a reverse shot sitting to the right, after long moments with the driver’s field.

To underline the story, two songs are inserted in the film. I am a pirate, I am a gentleman (Soy un truhán, soy un señor) of Julio Iglesias who is the manifesto of a gentlemanly machism of vintage playboy, that of the Spanish singer, the “professional of love”; similar to Gigi. On the other hand, Desperate Love by Italian singer Nada tells of a simple and genuine love born against the conformism that prevails in a trendy place. Comodin tells a pure love story that develops over the patrol’s wireless microphone. Another aspect are the dialogues which are repeated and improvised and also exasperating the normality of characters, up to making Gigi a familiar person, even after a finale full of tenderness and humanity.

Gigi the law (section The New Waves in 29º Seville European Film Festival) aims to stage a land forgotten by time, a dimension where time does not seem to pass. It is part of the magic of little things, of the everyday present in the poetics of the Venetian director.