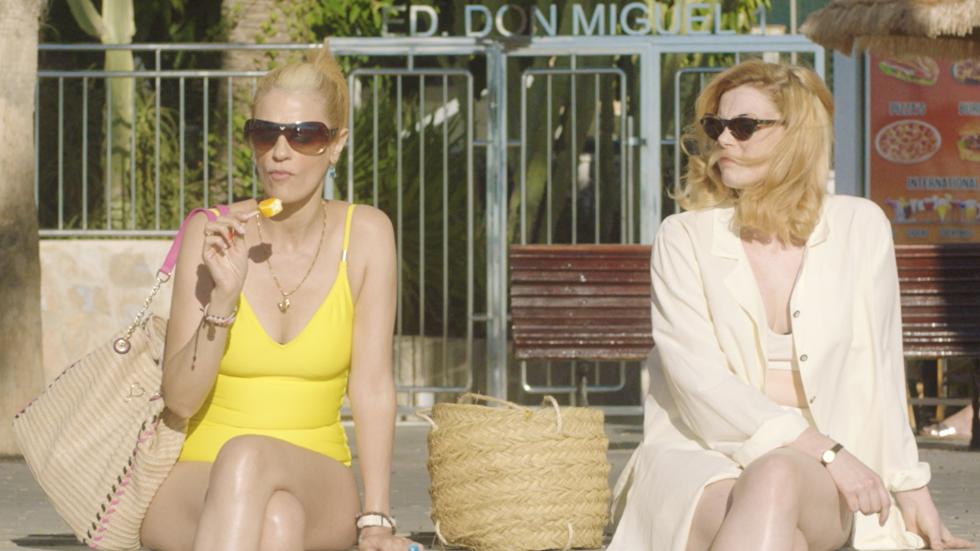 What would happen if, in a whimsical space-time jump, the North American poet Sylvia Plath and the media star Belén Esteban, aka the people's princess, crossed paths in the streets of Benidorm? Pure science fiction, or not so much, a question that finds answers in Sóc vertical però m'agradaria ser horitzontal, the second film directed by María Antón Cabot, one of the most suggestive proposals in the New Waves section. This is not the first time that the filmmaker has presented a work at the SEFF: in 2018 she won the DeLuxe Award after screening of Pico3, her debut film, in the Endless Revolutions section.

Sóc vertical però m'agradaria ser horitzontal begins in the summer of 1956, in Benidorm, among orange groves and the sound of a popular song (Ramonet, si vas a l'hort, porta figues i albercocs) performed by a local girl with her xirimita. We soon meet one of the two main characters in the film, the American writer Sylvia Plath, who spends her honeymoon in the Levantine lands (a historical fact recorded in the poet's own writings). Shortly afterwards, Plath travels back in time to the present day, - without knowing how, it doesn't matter much- to cross paths with a woman on the beach. "What do I do? I'm famous", the woman says to an astonished Plath. We learn that her name is Belén, that she appears on the cover of tabloids and on television. In the film, they are played by the Australian Odette Galbally and Ruth Gabriel.

About this almost cosmic encounter, which enables us to discover how much two apparently antagonistic people can have in common, we spoke to María Antón Cabot, director and editor (she performs this task in another of the films at the Seville Festival, H), who began as a member of the lacasinegra collective (with the group she presented Pas a Geneve at the Seville Festival in 2014), and who continues to collaborate with her long-standing partners. She tells us about it in this interview. 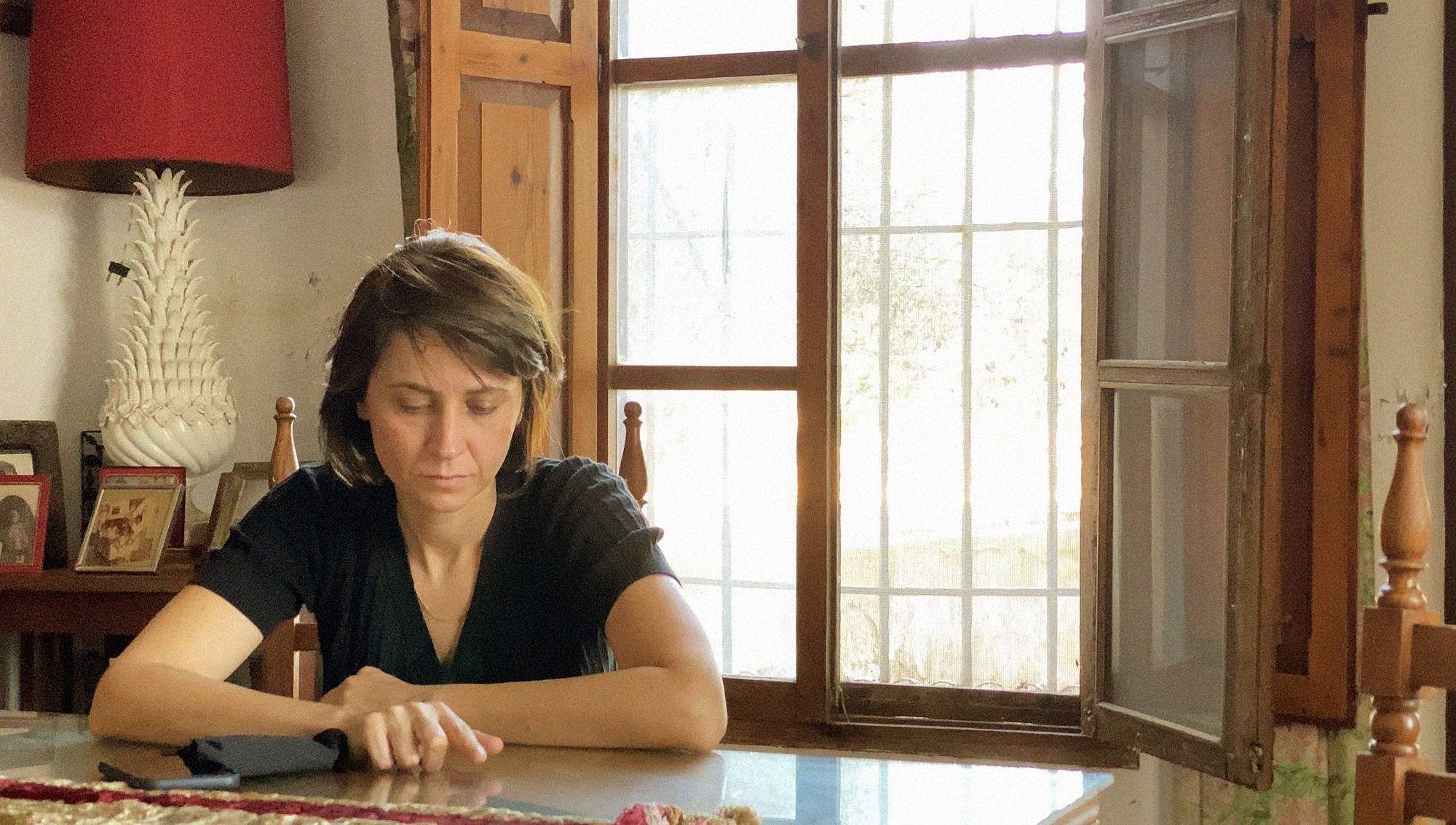 How did you come up with such a wild encounter between two women that no one would have thought of bringing together?

It is a way of playing with the imaginary of my town, there is no better way to tell the history of a town than through the people who have told us what the place was like. There are few prominent people who have set foot in Benidorm. I had known the story of Sylvia Plath for years from a teacher I had at high school, Pasqual Almiñana. In 2007 he made an in-depth study of the days she spent in Benidorm, and from there we all learned about it. Belén Esteban, on the other hand, I have seen her there over the years, and she has always defended the town in every media outlet. Somehow they have always been present in Benidorm, I just decided to put their stories together. I told my colleagues at my production company, DVEIN FILMS, and they said yes, they thought it was a very good idea, so then we just loaded up with reasons to make it happen.

The protagonists are two women who have in common heartbreak stories and a façade barely revealing what they have inside. Do you agree?

They both have a lot in common, they are very good at their confessional part, they manage to communicate with others in a pure way. They talk about misery, loss, rejection, oppression, envy, joys and sorrows, those things that I find difficult to talk about and for which so many people have identified with them. I can only thank them. What's more, Belén is a marvellous storyteller. You can listen to her on any television programme over the years. Or in her biography called Ambiciones y reflexiones, which is very funny, sincere and tender.

I think Sóc vertical però m'agradaria ser horitzontal is a title taken from one of Sylvia Plath's poems. What inspired you and what do you think can inspire others?

Yes, it's a title taken from a poem by Sylvia but with a slightly free translation of mine. It's a verse about life and desire, the desire to rest, or die. Visually this relationship seemed to me to fit perfectly not only with the background of the film, but also with the landscape, with the vertical buildings and the bodies lying on the sand. The film is the story of two women and, in parallel, the story of the city. Sylvia went to Benidorm on her honeymoon in 1956, just the year when the urban development plan was approved that turned the town into the city of skyscrapers and tourism that it is today. The dreams of that time are still with us today.

The film is 39 minutes long, a rather strange format, neither short nor long. How does that length fit in when you think about its distribution?

I know it's a strange format, but from the moment we shot the film we knew it was going to be that length. It was a story that we wanted to reach out to people and for there to be a part that suggested rather than closed off all possible solutions. We wanted the feeling to linger a bit in the air. 40 minutes was the perfect length to develop this feeling. Although the industry seems to turn its back on this format we wanted to release it this way for several reasons. We told Marvin & Wayne about it and they thought it was a great idea. What's more, it's a format they've been supporting for a long time. It's often talked about a lot. Almodóvar did it not long ago with The Human Voice. At a time when audiences and ways of watching films are changing, the medium-length film can have its place. It's almost like an episode of a series. You go to the cinema and then have a drink and talk about it. Or it could even be accompanied by a short or medium-length film by another director. These are formats that stay at festivals and don't have a commercial outlet. Nowadays, because of the kind of consumption we do, I think that a light length can be appetising and can even make very interesting sessions. We are in a moment of crisis and we will only get out of it if we try something new.

You started making films as part of the lacasinegra collective. What differences would you say there are with respect to your solo projects?

Well, we started making films as a collective, that was our film school. To tell you the truth, I don't notice the difference. I still work with Gabriel Azorín and Carlos Pardo Ros. And although we each sign our own projects, because each one has a different idea or drive, we are completely involved in each other's projects. Now the production company is DVEIN Films, and more people have joined the family. Like Teo Guillem, with whom Carlos already worked collectively. And we want to get involved in projects that we find and that fit in with our way of producing. The projects are structured around the production company, but we continue to work in the same way. Now we are presenting in Seville both H and Sóc vertical però m'agradaria ser horitzontal. And next year we will be shooting Gabriel Azorín's Anoche conquisté Tebas, which is our first feature-length fiction film.

And in line with your impulses, what interests you when it comes to launching a project?

It usually comes from a genuine interest, from an innate curiosity, and after talking about it and working on it with my colleagues, the ideas grow with them. To the point that they stop being mine. It sounds crazy, but they become living entities that show us the way. You create something that ends up surprising yourself, although you always recognise things of your personality, you end up creating tones, atmospheres, new places that are not so usual.

It's not your first time at the Seville Festival?

It's a very familiar festival, that pampers and takes care of the programme. Once you arrive you feel completely accompanied. It' s something that is so hard to do, something you dedicate so much time to, and you need to be looked after and given visibility. I also feel that there are many similar films that I really want to see and that I understand that they form part of a way of making and thinking about film. The SEFF is always committed to proposals that really change the way we see cinema.