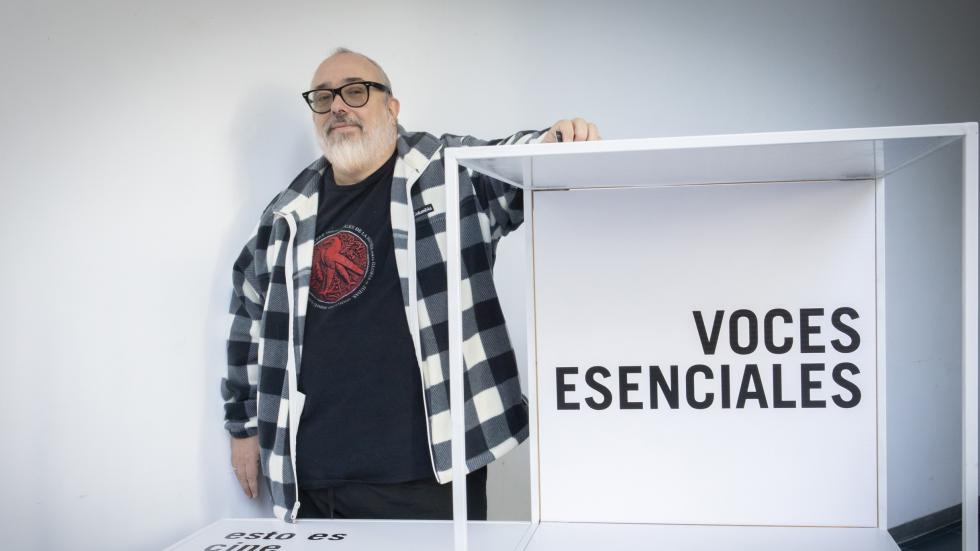 The filmmaker from Bilbao, who is participating in the Seville European Film Festival as producer of Eduardo Casanova's 'La piedad', closed the 'Essential Voices' cycle this Friday

An icon, a point of reference for audiences and other filmmakers as well as the creator of a universe of his own that endures in the collective imagination - an achievement that few creators have reached - Basque filmmaker Álex de la Iglesia was the last star of the SEFF's Essential Voices cycle this Friday.

In a session held in the packed courtyard of the CICUS, the director, screenwriter and producer - in this last facet visiting Seville, as the artificer in this field of La piedad, the second feature film by Eduardo Casanova, which will be screened this Friday at the Teatro Lope de Vega as part of the festival - shared with the large audience - full of young people - some of the keys that explain the degree to which he has been able to connect with different generations of spectators throughout his career.

Accompanied by the journalist Charo Ramos, coordinator of Voces Esenciales, who described De la Iglesia as a "point of reference for Spanish filmmakers for his way of making films from Spain with an international vocation", and by the critic, cultural manager and professor Fran G. Matute, who recalled that one of the director's films, Crimen ferpecto (2004), was shot in Seville, specifically in the centrally-located and long-gone Vilima department store.

Hand in hand with friend Urbizu

Referring to his presence in a cycle entitled Essential Voices, De la Iglesia said, with his characteristic humour and allergy to solemnity, that in his career he has managed to "make noise", but that he does not believe that there is "no one essential". His success, he added, has been "an event very much related to luck and above all to the festering of my intentions, because I am very persistent and I am not easily knocked down even if I am told no a hundred times, I go on and on and on until I manage to do, if not exactly what I want to do, at least something very close to what I want to do".

"The driving forces that have moved me have been, fundamentally, envy, jealousy, the anger of saying: others are doing it and I'm not", he confessed in a mocking tone about his beginnings in cinema and the transition from being a voracious film spectator and comic book reader to getting behind the camera. I probably have a poisoned and rotten soul, but that's how it was," he continued. Enrique Urbizu and I were very close friends, we made Super8 videos all the time, we spent our days discussing all sorts of subjects, in other words, what you do when you're young and things matter to you intensely. We would talk about how Carpenter was much better than Ridley Scott, about literature, about ways of living... And one day, suddenly, I found out that Enrique was going to make a film. I had a terrible time, it kept me awake for three or four nights... After that, I discovered that it was possible, that although it was very difficult, because cinema is a very expensive art to make, it was possible".

After shooting some purely amateur shorts, the filmmaker was able to shoot his first serious short, Mirindas asesinas, which attracted Pedro Almodóvar so much that he decided to produce his first feature film, Acción mutante, through El Deseo. Then came El día de la Bestia, one of those films that marked an entire generation, and practically a UFO on the Spanish film scene in the mid-1990s. And the rest, as they say, is history... 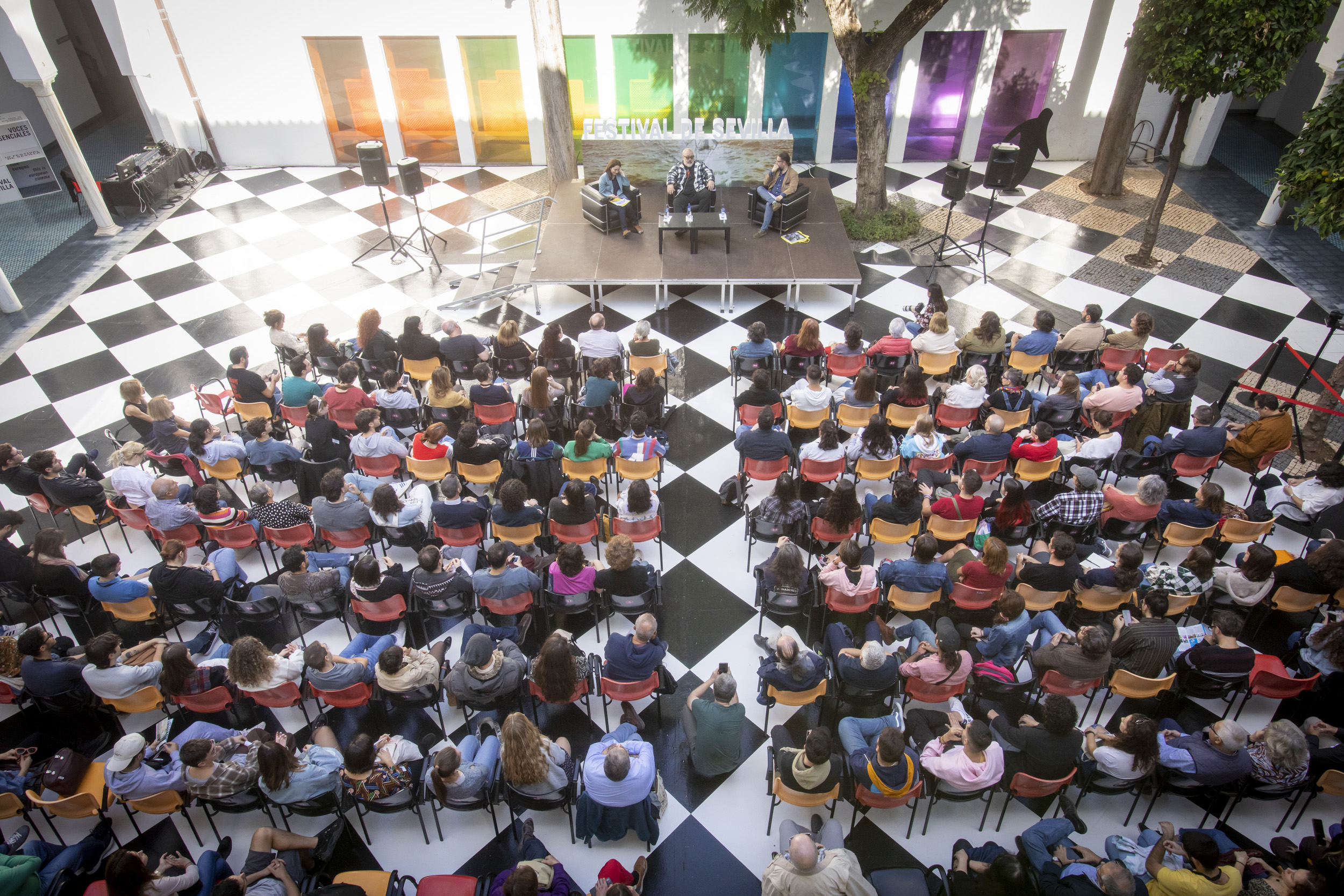 If there is one thing that the Bilbao-born director's films share, despite being "each one from its own father and mother, because I always try to do something different", it is his imaginary between the grotesque and the black comedy. "If we are honest, we are a reflection of what is put in front of us in life, and there are both personal experiences and images. The thing is that it makes me laugh when a director is asked about his influences and says: oh, well, Eisenstein, Wilder, Ford, of course German expressionism... But you're just quoting the greats of cinema, who we all know who they are, what do those directors have to do with your life! You're more of a Paco Martínez Soria fan, he really influenced you, because you've had enough of watching him as a child, whether you like it or not", he said.

"But of course, you don't mention Paco Martínez Soria, or Lina Morgan, or Mediaset's afternoon programmes, even though you watch them every day. I maintain that this influences you much more than Fritz Lang, just as the man you pass every morning in the lift influences you much more than Fritz Lang. I can give a list of the directors I like the most, but frankly I don't know if any of them have really influenced me", he added.

Hitchcock, Fellini and the popular cinema of the 80s

Naturally, all those present were interested in knowing the filmmaker's main inspirations, whether they were purely cinematographic or sentimental, and he has explained several: "Having said all this, I have always been interested in Spanish genre films and in seeing very ordinary people do incredible things, something that Hitchcock said about his films, in which there was always a poor man involved in a tremendous story. Anyway, I'm not going to tell you about any super unknown Czech film from 1937. I love Hitchcock's 50s and 60s, that golden age in which he made Death in High Heels, Vertigo, Psycho, Rear Window... For me, these are still the most perfect films ever made", explained De la Iglesia, who considers William Friedkin's The Exorcist to be the "most perfect" horror film.

"And I would also cite Fellini, for me the most cinematic of all European filmmakers," he continued, with his usual infectious enthusiasm. His films are not films, they are parts of a world: you don't see a film, you are in a film, and this is very clearly felt in a film like Amarcord. That's the kind of cinema I like. I also like John Ford, but I prefer Anthony Mann. Sydney Lumet drives me crazy: he doesn't have any extraordinary films, but they are all very good and he didn't need to have a particular style. In action films, I prefer Don Siegel. And then, of course, there is the cinema of the 80s, which changed my life. Every week you would see a film that seemed to be the best that had been made up to then, but the next weekend another one would come along and you would think the same thing: Indiana Jones Raiders of the Lost Ark, Blade Runner, Alien, Richard Donner's Superman, E.T., Close Encounters of the Third Kind, The Goonies, The Thing, De Palma, Scorsese... It was a cinema that seemed infinite, it gave the feeling that it was never going to end, but suddenly it stopped, it stopped being made when people just copied the same thing over and over again".

Being a Spanish filmmaker, as Fran G. Matute reminded us, it is inevitable that many relate Álex de la Iglesia's films to the lineage of Ibáñez Serrador, Berlanga and Buñuel. And with the latter, if he could only choose one: The Exterminating Angel is one of those films that change your life. I felt, watching it, that inside that film there was a mechanism by which I could interpret reality. Or that image of Simon of the desert, with an ataud running at full speed through the desert...".

"As a spectator, I always look for that moment when cinema becomes life. That is, as I said before, when you are watching a film and you feel that you are not only watching it, but that you are inside it. That's why when people say that I make winks in my films, I always say that they are not winks, they are life experiences that have marked me deeply, that have given me keys to understand life. Life seems to me to be a bad joke, a macabre joke, because in the end we all die. That I always make black comedy? No shit, of course I do!

Against the slow and the boring

The filmmaker has always been clear about art cinema, experimental or with a permanent authorial mark. "I'm not trying to change the world with my perspective on life and all that," he recalled, before finishing: "I think the most important thing is to entertain. "How do I get on with art house cinema? Well, look, fine, but if they are good films, and there are very few good ones. Of the twenty authors who happen to be the latest trend among critics, maybe I'm interested in one of them. And only that one, maybe, I'll let him be a pain in the ass. Even Shakespeare wasn't tedious, and he had a lot to say about the human condition. It turns out that even my mother likes King Lear".

"It's simply not necessary for a film to be slow. It's a question of generosity and respect for the spectator: if you have something to say, say it clearly. When a film is too long, is full of nods to this and that or doesn't even have a plot as such, what happens is that you give the viewer time to construct his or her own film. I think that's why critics make their own films, because they get bored, and end up finding twenty legs to the cat. I, on the other hand, think that a film is better the more attentive you have to be to make sure you don't miss anything. I think cinema is good when you don't have to analyse it, and Nicholas Ray is a good example of that: in his films you don't have time to know what's going on because, if you stop to think about it, it's already happened".